Chimeric antigen receptor (CAR) T-cell therapy with 2 different targets can produce durable responses for patients with relapsed or refractory multiple myeloma (MM), according to a phase 2 trial published in the Journal of Clinical Oncology.

Patients who received CAR-T cells targeting B-cell maturation antigen (BCMA) and CD19 had an overall response rate of 92%, and the median duration of response was 20.3 months.

This phase 2 trial enrolled 62 patients with relapsed or refractory MM. They all received anti-BCMA and anti-CD19 CAR-T cells. The patients’ median age at CAR T-cell infusion was 58 (range, 30-69) years, and the median time since diagnosis was 30 (range, 8-167) months.

Overall, 48% of patients had stage III disease, 24% had extramedullary disease, and 29% had high-risk cytogenetic abnormalities. The patients had received a median of 4 (range, 2-17) prior lines of therapy, and 27% had received an autologous stem cell transplant before CAR T-cell infusion.

At a median follow-up of 21.3 months, the overall response rate was 92%, and the median duration of response was 20.3 months.

The median progression-free survival (PFS) was 18.3 months, and the median overall survival (OS) was not reached.

All patients developed B-cell aplasia, and a majority developed neutropenia (98%), anemia (94%), or thrombocytopenia (79%). The researchers noted that side effects beyond 3 months were uncommon, except for B-cell aplasia (30%), hypogammaglobulinemia (42%), and infection (41%). 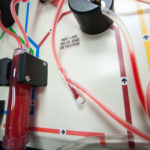