Treatment options for relapsed and refractory multiple myeloma (RRMM) have expanded considerably in the past decade, and more novel therapies are on the horizon, according to a recent review.1

The current options allow for the opportunity to tailor a treatment regimen based on disease characteristics, known side effects of drugs, and patient comorbidities, explained Hans C. Lee, MD, director of multiple myeloma clinical research at the University of Texas MD Anderson Cancer Center in Houston, who was not involved in the review but coauthored a 2020 paper on the topic.2

In treating RRMM, clinicians aim to “introduce classes that have not yet been used and to treat aggressively, as earlier responses are the longest ones,” added Joseph Mikhael, MD, professor at the Translational Genomics Research Institute in Phoenix, Arizona, and chief medical officer of the International Myeloma Foundation, who was not involved in the review.

The review authors noted that proteasome inhibitors, immunomodulatory drugs, and monoclonal antibodies (mAbs) are the main drug classes used in MM treatment, and combinations of these agents should be used for patients with early relapse.1

Patients with early relapse who are not refractory to lenalidomide can receive lenalidomide-based triplets, such as daratumumab, lenalidomide, and dexamethasone.

Patients with early relapse who are refractory to lenalidomide or who have aggressive relapse can receive pomalidomide-based, proteasome inhibitor-based, or anti-CD38 mAb-based triplets.

The only CAR T-cell therapy currently approved to treat MM in the United States is idecabtagene vicleucel (ide-cel), which produced “very impressive” responses and progression-free survival in the KarMMa study3, according to Dr Lee.

Another CAR T-cell therapy, ciltacabtagene autoleucel (cilta-cel), “has demonstrated unprecedented response rates, duration of response, and progression-free survival in the CARTITUDE-1 study4 and is currently under review for approval by regulatory agencies,” Dr Lee added.

Studies have shown overall response rates and complete response rates of 76% and 39% for ide-cel; 97% and 67% for cilta-cel; and 92% and 36% for another CAR T-cell therapy, orvacabtagene autoleucel (orva-cel).1 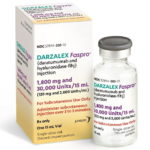