Adding daratumumab to first-line treatment can improve progression-free survival (PFS) in transplant-ineligible patients with high-risk multiple myeloma (MM), according to research published in The Oncologist.

Researchers observed a 41% reduction in the risk of disease progression or death when daratumumab was added to first-line treatment.

The pooled analysis included 190 patients who had newly diagnosed MM at baseline, were ineligible for autologous transplant, and had high-risk cytogenetics (ie, del[17p], t[4;14], or t[14;16]). In this group, 101 patients received daratumumab and 89 did not.

When the researchers assessed PFS by response status, they found the benefit with daratumumab was only present among patients who had a best response of CR or better.

“These findings provide additional evidence supporting the use of daratumumab-based treatment in this high-risk population of patients with a particularly high unmet need,” the researchers wrote.

Disclosures: This research was supported by Janssen Scientific Affairs, LLC. Some study authors declared affiliations with biotech, pharmaceutical, and/or device companies. Please see the original reference for a full list of disclosures. 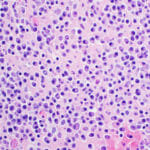 Elotuzumab Does Not Improve PFS in Newly Diagnosed Multiple Myeloma