Adding daratumumab to induction, consolidation, and maintenance therapy can improve outcomes in patients with newly diagnosed, transplant-eligible multiple myeloma (MM), according to final results from the GRIFFIN trial.

In this phase 2 study (ClinicalTrials.gov Identifier: NCT02874742), patients were randomly assigned to treatment with or without daratumumab. There were 103 patients who received RVd induction (cycles 1-4), followed by autologous transplant, RVd consolidation (cycles 5-6), and lenalidomide maintenance (cycles 7-32).

The final analysis revealed no new safety concerns. The rate of treatment-emergent adverse events (TEAEs) leading to discontinuation was 33% in the daratumumab arm and 31% in the RVd arm. TEAEs led to 1 death in each treatment arm, but neither death was attributed to study treatment. 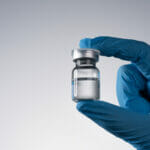