When considering a treatment, patients with multiple myeloma valued treatment attributes, such as costs, differently than caregivers, nurses, and physicians did, found a survey-based study reported in BCM Cancer.

For the study, 124 patients with multiple myeloma, 44 caregivers, 28 hematologists, and 34 nurses completed an online survey designed to capture preferences for treatment attributes.

Specifically, the survey included a discrete choice experiment, a component in which participants were given various treatment scenarios and asked whether they preferred Treatment A, Treatment B, or had no preference. The tool was designed to quantitatively capture participants’ preferences for the following characteristics of a treatment: average overall survival, remission period, side effects, out-of-pocket costs, and mode and frequency of administration.

All participants ranked overall survival as the most important attribute relative to the other measured attributes. However, overall survival was most valued by physicians — more so than patients living with multiple myeloma. Also, physicians and nurses ranked out-of-pocket costs as more important than caregivers and patients who had multiple myeloma did.

The study authors asserted that this finding suggests that physicians and nurses “overestimate” the importance of out-of-pocket costs for people living with multiple myeloma in the treatment decision process.

Another difference found was that caregivers viewed length of remission period as having more importance than any other surveyed participant. 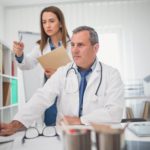