According to researchers, direct stochastic optical reconstruction microscopy (dSTORM) is much more sensitive than flow cytometry for detecting antigen levels on myeloma cells. This more sensitive method of measurement could help researchers identify potential candidates who could be eligible for treatment with chimeric antigen receptor (CAR) T-cell (CAR-T) therapies, and may also inform researchers about which low-level antigens may be important targets for the design of future adoptive cell therapies. The findings from this study were published in Nature Communications.

Flow cytometry is commonly used in clinical practice to quantify tumor-specific antigen levels as a means of determining patient eligibility for specific CAR-T therapies.  Nevertheless, the lower limits of antigen detection using flow cytometry have previously been estimated at a few thousand molecules per cell.

In this study, conducted following reports of responses to CD19-directed CAR-T therapy in patients with multiple myeloma, the CD19 expression profiles of myeloma cells in bone marrow biopsy specimens from 14 patients with histopathologic confirmation of multiple myeloma were evaluated using both flow cytometry and dSTORM. In addition, in vitro experiments were performed to determine the effects of CD19-directed CAR-T therapies on these specimens.

While myeloma cells in specimens from 2 patients were identified as CD19-positive by flow cytometry, dSTORM detected CD19 in 10 out of the 14 myeloma specimens.

Furthermore, in the 2 specimens determined to be CD19-positive by both flow cytometry and dSTORM, the percentages of CD19-positive cells detected by the latter method were substantially higher (eg, 30.4% vs 68% in 1 of the specimens, and 4.9% vs 32% in the other).  In addition, a range of CD19 expression was observed in myeloma cells, with average numbers of CD19 molecules of approximately 2240 and 730 on myeloma cells classified as having high and low CD19 expression, respectively. In short, dSTORM detected CD19 expression in patients who were deemed CD19-negative using flow cytometry.

“Taken together, our data show that CD19 is expressed at low and ultra-low levels on a substantial proportion of myeloma cells in patients that are falsely classified as being

In in vitro experiments, dSTORM showed that CD19 CAR-T therapy eliminated all CD19-positive myeloma cells, including those determined to express fewer than 100 molecules of CD19.

Nevertheless, the study authors noted that all 10 of the bone marrow biopsy specimens determined to be CD19-positive contained at least a fraction of CD19-negative myeloma cells. Hence, CD19 CAR-T therapy is unlikely to be associated with complete remission in patients with multiple myeloma unless coadministered with therapy targeting those other cells.

In commenting on the clinical applications of dSTORM, the study authors proposed that dSTORM, a “very time- and labor-intensive” technique, be used to complement, not replace, currently used methods of antigen detection on cells, such as flow cytometry and immunohistochemistry.

“These insights are relevant not only for CD19 CAR-T in myeloma, but also for CAR-T approaches targeting alternative antigens in other hematologic and solid tumor malignancies,” they concluded. “Indeed, we show CD20 expression on myeloma cells by dSTORM and recognition of myeloma cells that express CD20 at low density by CD20 CAR-T.” 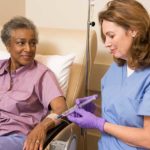