Subcutaneous (SC) daratumumab is preferred over intravenous (IV) daratumumab for patients with relapsed or refractory multiple myeloma (MM), according to researchers.

Final results from the phase 3 COLUMBA study showed that SC and IV daratumumab produce similar response and survival outcomes, but SC daratumumab is associated with a lower rate of infusion-related reactions (IRRs) and a shorter administration time (3-5 minutes vs 3-7 hours for IV). Researchers reported these results in Haematologica.

Daratumumab was administered once weekly for cycles 1-2, once every 2 weeks for cycles 3-6 (all cycles, 28 days), then once every 4 weeks until disease progression or toxicity.

No new safety signals emerged from the primary analysis to the final analysis. The researchers reported grade 3-4 treatment-emergent adverse events (TEAEs) in 50.8% of patients in the SC group and 52.7% in the IV group.

“The final analysis of COLUMBA provides long-term efficacy and tolerability data on daratumumab monotherapy and strongly supports the use of [daratumumab] SC to achieve clinical outcomes comparable to those with [daratumumab] IV, with a low rate of IRR, short administration time, and without dose adjustment,” the researchers wrote. “Based on these results, daratumumab SC is considered a preferable treatment option relative to daratumumab IV for the patients with multiple myeloma.”

Disclosures: This research was supported by Janssen Research & Development, LLC. Some study authors declared affiliations with biotech, pharmaceutical, and/or device companies. Please see the original reference for a full list of disclosures. 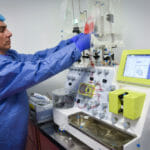