J. Leonard Lichtenfeld, MD, deputy chief medical officer of the American Cancer Society in Atlanta, Georgia, called the Mayo Clinic group’s work “definitive,” underscoring the value of long-term observational research in the understanding of disease. Not only does the study clearly delineate between “what looks like one disease process, but is actually two,” in individual patients, he said, it paints a prognostic picture likely to have increasing importance as the population ages.

“With increasing life expectancy and a large number of folks over 70, we’re going to be seeing a fair number of patients where this [MGUS] is picked up,” he said. “It will be an issue really for primary care physicians whose patients may be more vulnerable to these cancers.”

But, Dr Lichtenfeld supports the “watch and wait” standard of care for MGUS, rather than widespread screening. Screening needs to show efficacy and make a difference in patient outcomes, he said, or patients may be subjected to unnecessary interventions with potentially serious side effects.

That could, however, change — perhaps even within the next 5 years, depending on the outcome of a large randomized clinical trial now under way in Iceland.2

In the study, which began in 2016, investigators plan to screen 80,000 individuals for MGUS in the Icelandic population, evaluating the benefits and harms of monitoring or intervention over a 10-year period.

The study has 3 arms. In the first, patients will have MGUS, but won’t be told or have active follow-up, a condition agreed to through informed consent, said C. Ola Landgren, MD, PhD, the study’s co-lead investigator and the chief of Memorial Sloan Kettering’s Myeloma Service in New York, New York. The other arms will be stratified into lower and higher risk groups for myeloma, he said, with the highest risk patients — those diagnosed with smoldering multiple myeloma — undergoing bone marrow biopsy along with regular blood tests.

“Many patients who present with low [blood] protein actually have a lot of abnormal proteins in their bone marrow,” Dr Landgren said. “In this study, we will pick up patients who are much sicker than you would initially think.”

The investigators anticipate they will have sufficient statistical data within 5 years to possibly change clinical strategies, though any findings will need endorsement in a consensus document.

“Right now we can make a diagnosis of myeloma based on blood markers,” Dr Landgren said, but the goal is to uncover earlier markers where clinicians might intervene, or even move towards a cure. To that end, he said, investigators intend to generate genetic signatures from bone marrow samples that, ultimately, might serve as molecular targets for delaying, treating, or preventing disease. 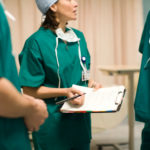