Tarek H. Mouhieddine, MD, from the Icahn School of Medicine at Mount Sinai in New York City, and colleagues identified 58 patients with multiple myeloma whose disease was progressing after a BiAb trial.

The patients had a median of 6 lines of prior therapy. Most (89%) were triple-class refractory, and 44% were penta-refractory. Patients were followed for a median of 30.5 months after the BiAb trial and received a median of 2 additional salvage therapies.

T-cell redirection therapy was feasible as first or second salvage and was associated with a median PFS1 of 28.9 months, a median PFS2 of 30.9 months, and a 2-year OS rate of 62%.

“This study shows patients relapsing after initial BiAb therapy can benefit from a second BiAb or CAR T-cell therapy,” a study author said in a statement. 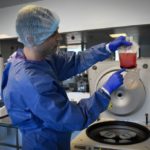