Results of a retrospective analysis of 2 large, randomized studies of patients with newly diagnosed multiple myeloma (NDMM)1 showed that implementation of International Myeloma Working Group (IMWG) thromboprophylaxis guidelines2 in those undergoing treatment with immunomodulatory imide drugs (IMiDs) was not very effective in preventing venous thromboembolism (VTE), according to findings published in Blood.

The risk of VTE is high in patients with multiple myeloma, particularly in those with newly diagnosed disease. While the occurrence of VTE has been associated with increased morbidity and mortality in these patients, data related to this adverse effect from large, prospective studies are lacking.

This analysis used data from 2 large, randomized studies of patients with NDMM: the Myeloma IX study (ISRCTN68456411), which was initiated prior to publication of the IMWG guidelines, and the Myeloma XI study (ISRCTN4940785) in which patients received IMWG-directed prophylaxis that included at least 3 months of aspirin or low-molecular weight heparin therapy in those considered to be at low- and high-risk of VTE, respectively.

In brief, transplant-eligible patients in Myeloma IX trial were randomly assigned to receive cyclophosphamide, thalidomide, and dexamethasone (CTD) or cyclophosphamide, vincristine, doxorubicin, and dexamethasone (CVAD) prior to autologous stem cell transplantation (ASCT), while patients deemed to be transplant ineligible were treated with attenuated CTD (CTDa) or melphalan plus prednisolone (MP) induction chemotherapy. Following initial therapy, patients were randomized to receive maintenance therapy with thalidomide or observation. 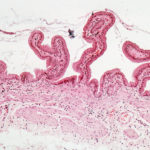