In a pilot study performed by researchers from Johns Hopkins University School of Medicine in Baltimore, MD, tantalizing evidence was found that a simple blood test may one day detect pancreatic cancer at an early stage, when curative treatment might be an option.1

Pancreatic cancer is the fourth-leading cause of death from cancer; it has a 5-year survival rate of only 5%, a statistic that has not improved over the past three decades. Most patients are diagnosed in the advanced stages, when treatment options are limited.

“We have mammograms to screen for breast cancer and colonoscopies for colon cancer, but we have had nothing to help us screen for pancreatic cancer,” said study leader Nita Ahuja, MD, associate professor of surgery, oncology, and urology at Johns Hopkins. “While far from perfect, we think we have found an early detection marker for pancreatic cancer that may allow us to locate and attack the disease at a much earlier stage than we usually do.”

By studying pancreatic cancer cell lines, the Johns Hopkins researchers identified eight genes that had novel cancer-specific DNA methylation alterations and focused on two of them for further analysis: BNC1 and ADAMTS1. They found that these genes were frequently methylated in cancerous cells, including 97% of stage 1 invasive cancers. Pancreatic cancer precursor lesions also showed frequent methylation of BNC1 and ADAMTS1.

DNA methylation of BNC1 and ADAMTS1 results in epigenetic modifications—that is, changes that alter the function of the genes without affecting their underlying DNA sequence. These changes were associated with down-regulation of gene expression in pancreatic cancer cells.

To detect the methylated genes in serum, the researchers employed methylation on beads (MOB) technology, which uses nanoparticle magnets to latch onto molecules shed by tumors and permits capture of minute amounts of DNA. The MOB technique was able to identify the altered genes in serum samples from 42 patients with pancreatic cancer, with sensitivity and specificity of 79% and 89% for BNC1, and 48% and 92%, for ADAMTS1, respectively. Testing for methylation of both genes had sensitivity of 81% and specificity of 85%.

By contrast, BNC1 and ADAMTS1 were not methylated in cells taken from healthy patients or from patients with a history of pancreatitis, a risk factor for pancreatic cancer.

To learn more about the function of these genes, the researchers inserted nonmethylated BNC1 into pancreatic cancer cells lacking BNC1 expression. They observed a reduction in cell proliferation, suggesting that, in its normal, nonmethylated state, BNC1 may have tumor-suppressive effects.

Dr. Ahuja cautioned that her team needs to duplicate the results in a larger sample of tumors before testing this method in patients. While she does not foresee a blood test for pancreatic cancer being used to screen the general population, she deems that this type of test would be useful for individuals at high risk, such as those with a family history of pancreatic cancer, a history of pancreatitis, long-term smokers, and people with BRCA gene mutations. If methylated BNC1 and ADAMTS1 were found in a patient’s blood, further testing would be needed to locate a tumor. 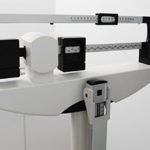