A large cross-sectional cohort study of survivors of childhood cancers showed that more than one-third of patients treated with potentially ototoxic therapy experienced severe hearing impairment, with associated increased risks of deficits in verbal abilities, as well as executive functioning, and other cognitive skills.1 These findingswere presented in JAMA Oncology.

There is a substantial body of literature on the negative impact of hearing impairment occurring prior to the development of language skills on academic performance in children. However, few studies have assessed these measures in the setting of acquired hearing impairment despite known ototoxicity associated with many childhood cancer treatments, such as platinum-based chemotherapy and cranial radiotherapy (CRT).

This study included 1520 childhood cancer survivor participants from the St. Jude Lifetime Cohort Study. All participants included in this analysis had to have survived at least 5 years following their original cancer diagnosis, and had to be eligible for audiologic evaluation, including otoscopy, tympanometry, pure tone audiometry, and speech audiometry evaluations, as well as neurocognitive testing that included assessments of intelligence, attention, memory, executive function, processing speed, and academic function.

The median age of the survivors included in this analysis was 29.4 years, and the median time since diagnosis of the original cancer was 20.4 years.

Of note, 7.3% and 8.8% of participants without a history of exposure to ototoxic therapy were found to have mild and severe hearing impairment, respectively, leading the study authors to comment that “severe [hearing impairment] in the no exposure group was more prevalent in survivors aged 7 to 39 years compared with the general US population.”

After classification of all study participants according to the presence of severe hearing impairment vs not, and stratification into 1 of 3 groups according to treatment exposure history — platinum-based chemotherapy (ie, cisplatin or carboplatin), CRT with or without platinum-based chemotherapy, and no exposure to these treatments — multivariable analyses adjusting for relevant covariates, such as age, sex, and time since diagnosis, were conducted.

A key study finding was that the relative risk (RR) ratio for development of severe hearing impairment was 1.68 (95% CI, 1.20-2.37) and 2.69 (95% CI, 2.02-3.57) for those exposed to platinum-based chemotherapy and those treated with CRT with or without exposure to platinum-based chemotherapy, respectively, compared with those survivors without exposure to ototoxic therapy.

Interestingly, in the group of cancer survivors without hearing loss who had undergone treatment with platinum-based chemotherapy, approximately 70% had been treated with carboplatin chemotherapy only.

In addition, the risks for deficits in attention, processing speed, and executive function were significantly higher for those with severe hearing loss vs not.

In commenting on these results, the study authors noted that “this study is the first, to our knowledge, to demonstrate that severe [hearing impairment] mediates a substantial portion of the association between cranial RT and neurocognitive deficits.”

Potential study limitations included the absence of data related to the onset of hearing impairment and neurocognitive deficits, history of exposure to other types of ototoxic factors, and hearing aid use.

“Prospective studies investigating the association between adherence to hearing aid use and neurocognitive outcomes in survivors of childhood cancer are needed,” the study authors concluded.

In concurring with this conclusion, the author of an accompanying editorial noted that “further study is needed to determine whether neurocognitive deficits identified in childhood cancer survivors with severe hearing impairment can be remediated through audiologic interventions (for survivors who have already sustained them) or, more important, whether these neurocognitive deficits could be prevented through early audiologic screening and intervention.”2 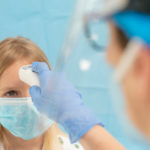