Patients who undergo radiotherapy for the treatment of childhood cancer have an increased risk of developing meningioma later in life, and that risk may persist for 30 years, according to a case-control study published in JAMA Oncology.

The risk of developing meningioma was particularly high among childhood cancer survivors who received higher radiation doses and those who received radiation at a younger age, researchers found.

The team conducted this case-control study in 1011 childhood cancer survivors — 273 who developed meningioma and 738 who did not. Patients were diagnosed with their primary cancer between 1942 and 2000, and follow-up continued until 2016.

Radiation was administered to 96.0% of the meningioma cases and 69.0% of the control patients.

The researchers noted that the dose-response association was approximately 4 times greater for patients who had radiation exposure before 10 years of age.

In addition, the risk of meningioma associated with radiation persisted throughout the survivors’ lifetimes, with a significant increase in risk observed 30 years after radiation exposure (EOR/Gy, 3.76; 95% CI, 0.77-29.15).

“The results of this pooled case-control study suggest that the meninges are among the most radiosensitive tissues, especially for children younger than 10 years,” the researchers concluded. “These results support the reductions in whole-brain irradiation over recent decades and the use of radiotherapy approaches that limit exposure of healthy tissue in children. The persistence of elevated risks of meningiomas for 30 years after cranial radiotherapy could help inform surveillance guidelines.” 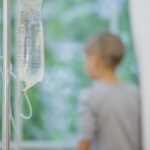