(HealthDay News) — Although the use of active surveillance (AS) for low-risk prostate cancer significantly increased over time, there was a relatively high rate of discontinuation during a recent five-year period, according to a study published online Aug. 20 in The Journal of Urology.

Narhari Timilshina, from the University of Toronto, and colleagues used linked administrative databases and pathology reports to identify all men diagnosed with Gleason score ≤6 prostate cancer between 2008 and 2014 to identify factors associated with AS discontinuation.

The researchers found that 51 percent of cases had AS as the initial management strategy. During the study period, AS use significantly increased (38 percent in 2008 to 69 percent in 2014). Compared with men on initial treatment, those on AS were significantly older (62 versus 64 years).

After a median follow-up of 48 months, 51 percent of patients discontinued AS. For AS patients, treatment-free survival at one, three, and five years was 85, 58, and 52 percent, respectively, with a median time to definitive treatment after initial AS of 16 months.

Younger age at diagnosis, year of diagnosis, higher comorbidities, treatment at an academic center, treatment by a physician and at an institution in the highest volume tertile, and adverse cancer-specific characteristics were associated with AS discontinuation.

“These results may help guide policy making, developing quality indicators, and developing targeted continued education for physicians and patients embarking on AS to establish realistic expectations,” the authors write. 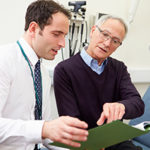 Fear of Recurrence Persists for Some Prostate Cancer Survivors