Use of androgen deprivation therapy (ADT) may be associated with an increased risk of Alzheimer’s disease, according to a recent study published online ahead of print in the Journal of Clinical Oncology.1

Kevin Nead, MD, MPhil , of the Hospital of the University of Pennsylvania in Philadelphia, and colleagues conducted a retrospective cohort study of 16 888 men with prostate cancer in a previously validated and implemented text-processing pipeline.

They tested the effect of ADT on risk of Alzheimer’s using 1 to 5 propensity score-matched and traditional multivariable-adjusted Cox proportional hazards models.

Among 2397 men who received ADT with a median follow-up of 2.7 years, both hazards models suggested a statistically significant association between ADT use and Alzheimer’s disease risk.

They also observed a statistically significant increase in risk of Alzheimer’s with higher duration of ADT. 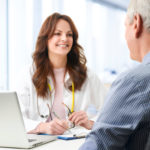