Men with prostate cancer treated with gonadotropin-releasing hormone (GnRH) agonists are at increased risk for cardiovascular events and mortality, particularly if they have a recent history of cardiovascular events, according to a study published in the Journal of Clinical Oncology.1

The risk of cardiovascular events is reduced in patients with prostate cancer treated with antiandrogens but increased in men who have undergone surgical orchiectomy, the researchers found.

The study results were derived from an analysis of data included in the National Prostate Cancer Register of Sweden between 2006 and 2012.

For each patient with prostate cancer in the register, the researchers selected five men without prostate cancer, matched for age and area of residence, to serve as a comparison group.

Of the 41,362 subjects with prostate cancer, 10,656 were taking antiandrogens, 25,955 were taking GnRH agonists with or without antiandrogens as flare protection, and 3,747 underwent orchiectomy.

RELATED: Cixutumumab Plus ADT Not Effective for Hormone-Sensitive Prostate Cancer 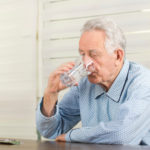 Cixutumumab Plus ADT Not Effective for Hormone-Sensitive Prostate Cancer