Patients with prostate cancer patients who received androgen deprivation therapy (ADT) appeared to have lower risk of serious complications from coronavirus disease 2019 (COVID-19), according to data from research conducted in Veneto, Italy. The study, which included 9280 patients who tested positive for SARS-CoV-2 infection, was published online in the Annals of Oncology.1

“Considering only the Veneto male population (2.4 million men), 0.2% and 0.3% of non-cancer and cancer patients, respectively, tested positive for SARS-CoV-2,” wrote the authors.

However, when they separated the prostate cancer patients according to whether they received ADT, they discovered that patients on ADT had a lower risk of infection than other patients, even those without cancer. “Strikingly, only 4 out of 5273 patients receiving ADT in Veneto developed SARS-CoV-2 infection, and none of these patients died,” the authors wrote.

There is a biologically plausible hypothesis for the relationship between the ADT and COVID-19. To enter the cell, SARS-CoV-2 binds to the ACE2 receptor. After it binds, a serine protease called TMPRSS2 cuts off the spike protein from the virus, allowing it to fuse with the cell membrane.2 Testosterone stimulates production of TMPRSS2, and in many prostate cancers, the protease boosts tumor growth. ADT is frequently used to treat nonmetastatic prostate cancer.

Evidence suggests that lung epithelial cells also express TMPRSS2. Treating lung cells with a serine protease inhibitor reduces the ability of SARS-CoV-2 to enter the cell. Hypothetically, drugs such as androgen inhibitors should reduce the expression of TMPRSS2, and hinder the ability of the virus to infect lung cells.

However, it’s unclear whether ADT reduces TMPRSS2 activity in the lungs. A recent preprint publication looked at mRNA expression of TMPRSS2 and androgen receptor (AR) in the lungs in male and female mice.3 After treating the mice with enzalutamide, a nonsteroidal antiandrogen, they found no change in TMPRSS2 mRNA expression levels, although this doesn’t rule out the possibility of changes in the protein level. “Overall, we still do not fully understand the regulation of TMPRSS2 in pulmonary tissues and how androgen deprivation may or may not impact the entry of SARS-CoV-2 and the severity of COVID-19,” said Matthew Tucker, MD, clinical fellow in Hematology/Oncology at Vanderbilt University in Nashville, Tennessee. 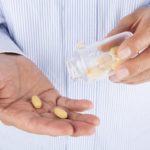