According to the 2011-2015 US Surveillance, Epidemiology, and End Results (SEER)-Medicare database, 3979 Black patients (10.1%), 32,585 White patients (82.4%), and 7.5% patients identifying as American Indian, Alaska Native, Asian, Pacific Islander, or another race received a prostate MRI within 6 months of localized prostate cancer diagnosis. Of the full cohort, 5.9% had Latino ethnicity.

Fewer Black than White men received a prostate MRI (6.3% vs 9.9%) with 38% lower odds of this imaging. Receipt of prostate MRI among men of other races was similar to that among White men.

Using mediation analyses, the investigators determined that 24% of the racial disparity in prostate MRI use between Black and White patients was attributable to geographic differences, 19% to neighborhood-level socioeconomic status, 19% to racialized residential segregation, and 11% to low individual socioeconomic status (defined as dual eligibility for Medicare and Medicaid).

In a model, these mediators accounted for 81% of the observed racial disparity in prostate MRI use between Black and White patients, the investigators reported. Clinical and pathologic factors were not significant mediators of racial disparities, they pointed out.

“This research suggests that targeted actions to address race-based differences in prostate MRI use should incorporate a focus on spatial factors as well as upstream social determinants of health,” the investigators wrote.

In an accompanying editorial, Michael Poulson, MD, of Boston University School of Medicine, lauded the study as a “model for accurate and robust study of racial disparities in the context of the discriminatory landscape from which they were built.”

“Solutions to racial disparities are attainable through actionable reparative actions aimed at righting the wrongs of history and narrowing the racial wealth gaps created by the discriminatory history of the US,” Dr Poulson wrote. “Not all solutions to health care disparities are solved in the hospital. Many must come from changes to the societal structure in which we all live.” 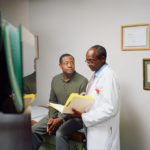