Improvements in the technology used to capture circulating tumor cells (CTCs) may offer a better way to understand prostate cancer progression, the evolution of drug resistance, and metastasis.1,2

The most-employed CTC capture platforms use an antibody that targets the epithelial cell surface protein, EPCaM.2 But authors of a new study instead used Parsortix™, which captures large and less flexible or deformable cells from blood samples.

That means it can capture a wider range of CTC and cell types, potentially improving the sensitivity and applications of liquid biopsy.

“It can capture both epithelial and mesenchymal CTCs,” explained senior study author Yong-Jie Lu, MD, PhD, of the Barts Cancer Institute at Queen Mary University of London in England. “We also developed a method for efficiently transferring captured cells onto slides for molecular and genetic analysis to identify the features of captured cells.”

The ability to capture epithelial cells transitioning to mesenchymal phenotypes, or fully-transformed mesenchymal cells, improved the detection in blood of both localized and castration-resistant disease.

Using the cell-capture technology and repeated fluorescent in situ hybridization (FISH) analysis of blood from 81 men, Dr Lu and colleagues found that the number of CTCs and circulating epithelial-mesenchymal transition (EMT) prostate cancer cells were of prognostic value.

The association of CTCs that are undergoing or that have completed EMT with prostate cancer had not been previously reported, Dr Lu told Cancer Therapy Advisor.

“We showed that although all subtypes of CTCs are associated with cancer metastasis, the CTCs undergoing epithelial-mesenchymal transition are…more significantly correlated with prostate cancer metastasis,” he said. “As these CTCs can be detected in a large proportion of patients with localized prostate cancers, they clearly appear a long time before macroscopic metastatic tumors form.”

The ability to assess different molecular CTC subtypes, and the possible prognostic value of mesenchymal CTC counts, are notable, according to Josep Domingo-Domenech, MD, PhD, associate professor of pathology at the Icahn School of Medicine at Mount Sinai in New York, New York. 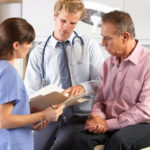