Prostate cancer is the second most common cancer among men in the United States, with close to 200,000 new cases estimated in 2016; close to 26,000 deaths will be attributed to the disease.1 Approximately 1 out of every 7 men in the US will be diagnosed with prostate cancer in his life, though diagnoses become more common with advanced age.

Prostate cancer frequently metastasizes to the bones, lymph nodes, lungs, liver, and brain. Rarely, however, patients will develop metastases to the gastrointestinal tract (GIT), which limit treatment options. In a large post-mortem study, 2.5% of patients had evidence of prostate cancer to the stomach on autopsy.2

Patients with prostate cancer metastasizing to the GIT may present with a multitude of symptoms, including abdominal pain, nausea and/or vomiting, overt or occult GI bleeding, and weight loss. If the metastatic lesions are large enough, they can cause a physical obstruction anywhere in the GIT. GIT metastases may, however, be asymptomatic.

Basic laboratory studies are often non-specific for identifying GIT metastases. It may be helpful to review the trend of a patient’s prostate specific antigen (PSA). If the PSA is trending up, it may indicate more aggressive disease, though there is no exact level that correlates with a higher risk of GIT metastases.

Cross-sectional imaging, such as computerized tomography (CT) scans of the abdomen and pelvis, may help identify large lesions, though these tests may not detect smaller lesions that can be seen on upper endoscopy (EGD). It is also important to evaluate a patient’s medications, which may contribute to or mask some of the patient’s symptoms. Important medications to inquire about include non-steroidal anti-inflammatory drugs (NSAIDs) and recent chemotherapy.

If the patient undergoes EGD, the appearance of metastatic prostate cancer to the GIT can vary. Metastases can appear as nodules or ulcers that can be biopsied to help delineate the underlying diagnosis. Malignant lesions that bleed within the GIT are difficult to control and have limited options. There have, unfortunately, been no well-controlled studies evaluating the best treatment regimens in this clinical scenario.

Oncologists should consider the possibility of metastases to the GIT if a patient presents with GI symptoms. 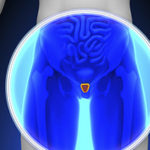