Bipolar androgen therapy (BAT) resulted in similar progression-free survival (PSA) and reduction in prostate-specific antigen (PSA) compared with enzalutamide among men with metastatic castration-resistant prostate cancer (CRPC), according to the results of a phase 2 trial published in the Journal of Clinical Oncology.1

“The TRANSFORMER trial is unique in that it compares two treatments with diametrically opposite effects on the androgen receptor therapeutic target,” the authors wrote.

Androgen deprivation therapy is the standard of care for prostate cancer but can result in treatment resistance due to adaptive upregulation of the androgen receptor. BAT aims to address this by rapidly cycling the patient from high to low serum testosterone.

At baseline, the median age was 71;  87% of patients were White, 7% were Black or African American, 3% were Asian, 1% were American Indian, and 3% were of other race. The majority of patients had an Eastern Cooperative Oncology Group performance status of 0 or 1. Most patients had a Gleason score of 7, 8, or 9-10. The mean baseline PSA was 47.45.

In subgroup analyses, both PFS and OS favored BAT among men with a short (defined as less than 6 months) response to abiraterone.

Grade 3 to 4 adverse events occurred more frequently with enzalutamide at 35.1% compared with 28.1% with BAT. The rate of serious adverse events was similar at 19.1% and 20.6% with BAT and enzalutamide, respectively. Fatigue was more common with enzalutamide, affecting 48.5% at grade 1 to 2 and 7.2% of patients at grade 3 to 4, compared with 31.5% of patients receiving BAT who developed grade 1 to 2 fatigue. 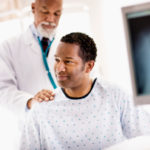