The phase 3 NRG Oncology/RTOG (Radiation Therapy Oncology Group) 0521 trial aimed to evaluate if there was any benefit to adding docetaxel chemotherapy (CT) to standard treatment with long-term androgen suppression (AS) plus radiotherapy (RT) in men with prostate cancer considered to have high-risk disease without evidence of metastasis.1 Docetaxel had been routinely used in men with metastatic castration-sensitive prostate cancer with improvements in overall survival (OS), therefore, there was interest to study its impact in a different subgroup of men with prostate cancer.1

Similarly, the cumulative incidence of distant metastasis (DM) was lower in the docetaxel CT + AS + CT group at 20% (95% CI, 15% to 25%) compared with the AS + RT only group at 22% (95% CI, 17% to 27%), although this again was not statistically significant (2-sided log-rank, P =.29). There was no statistical difference in the number of patient deaths between the 2 groups, and no new treatment-related grade 5 toxicities were reported.

Based on this updated long-term data, it appears that most of the benefit of adding docetaxel to AS + RT in men with high-risk prostate cancer is modest and observed earlier in the treatment course, as shown in the initial study.

The safety data included in this abstract was limited, but it does not appear that any new toxicities developed. The authors mentioned that a future pooled analysis may be conducted in order to expand the number of total patients that have received docetaxel in the same clinical setting.

Aside from this study, there have been several other studies evaluating docetaxel in a similar patient population including GETUG-12 (Groupe d’étude des Tumeurs Urogénitales), SPCG-12 (Scandinavian Prostate Cancer Group) and SPCG-13.1 Future studies can also aim to find new biomarkers that could help determine the best candidates for adding docetaxel to their regimen.

When evaluating these data, especially with the modest improvements shown, it is important to note the details of adding docetaxel to a patient’s regimen. For the patients receiving docetaxel, the protocol called for 6 cycles of docetaxel 75 mg/m2 intravenously (IV) over 1 hour every 21 days and prednisone 10 mg by mouth daily until 21 days after the last cycle of docetaxel. Depending on the patient, this could be a challenging regimen to follow in the real-world setting. Although docetaxel appeared to be relatively well tolerated in the initial study, the associated toxicities need to be thoroughly reviewed with the patient. It will be important to collect patient-reported outcomes from patients treated with docetaxel in order to further guide a treatment decision. 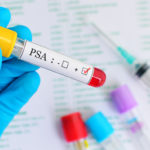