A genetic risk score (GRS) can help clinicians identify which patients with lower urinary tract symptoms (LUTS) are most likely to have prostate cancer, according to research published in the British Journal of Cancer.

The researchers noted that LUTS, such as nocturia, urinary frequency, or poor stream, are often present at the time of a prostate cancer diagnosis, but these symptoms are associated with benign conditions as well. With this study, the researchers aimed to determine how accurately a GRS for prostate cancer could identify the disease in men consulting with their general practitioner about LUTS.

The researchers used data from 247 men with White European ancestry from the UK Biobank that was linked to primary care records. Their outcome measure was a prostate cancer diagnosis within 2 years of consultation, and the predictor was a GRS of 269 genetic variants for prostate cancer.

“This study is the first to demonstrate that genetic risk scores can improve the selection of men for suspected prostate cancer investigation in primary care, over and above presenting clinical features,” the researchers reported.

They noted that any combination of clinical features representing a 3% or higher chance of cancer should be investigated, although that could be lowered to 2%. “The integrated risk model presented in this study could be used to risk stratify men with LUTS above and below this threshold,” the researchers wrote.

The study findings suggest that GRS has the potential to improve the diagnostic pathway of patients with LUTS. Patients with the highest risk could be fast-tracked for additional investigation, the researchers suggested.

This study was limited by its inclusion of only men with White European ancestry, which was the result of a lack of ethnic diversity in the UK Biobank. The researchers reported this as a “substantial limitation” because prostate cancer is twice as likely to occur in Black men. In addition, the study cohort included a significant number of younger men, which may affect the predictive power of GRS as integration with age may affect its outcomes. 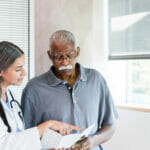