Solid organ transplant recipients (SOTRs) can have between a 2 to 3 times higher risk of developing certain cancers including non-Hodgkin lymphoma (NHL), colorectal cancer (CRC), lung cancer, and kidney cancer.1 This has led many physicians to alter their cancer screening protocols in SOTRs, including in prostate cancer (PC), even though the data in this unique patient population are not as clear as they are in other malignancies.1,2

Hall and colleagues reviewed 164,156 SOTRs in the United States between 2000 and 2008 and found a total of 350 cases of prostate cancer. Patients older than 60 years who are receiving heart transplants had the highest 5-year cumulative incidence of prostate cancer, at 3.65%. SOTR groups that were found to have 5-year cumulative incidence similar to or greater than the general population at age 50 years (2.34%) were kidney, liver, and lung recipients between 51 and 60 years or older and heart recipients between age 36 to 50 years or older.

Despite this study’s findings, there have also been other studies showing no increased risk or even decreased risk.1 Some of the these disparities may be secondary to PC screening protocols followed prior to transplant including the surgical removal or treatment of PC and/or deferring SOT in patients found to have any evidence of PC.1,2 Therefore, PC screening and diagnosis has become somewhat controversial, especially after transplantation. A group led by Waeckel and colleagues recently reviewed their center’s experience with PC screening in SOTRs and published their findings in International Urology and Nephrology.2

A total of 1565 male patients received a SOT during the 30 year study period: 1000 RTRs, 359 HTRs and 206 CTRs. The incidence of PC in these 3 SOTRs was 3.6%, with an overall mortality of 0.19%.  Most patients were classified as T1 (50.9%). Median age of SOTR was 57.7 years old and PC diagnosis was 64.9 years old. PC diagnosis post SOTR was made predominantly on annual screening (52/57, 91.2%) and rarely based on symptoms. The most common causes for SOTR in each group included: RTR (idiopathic glomerulonephritis and hepatorenal polycystic disease), HTR (alcoholic cirrhosis), and CTR (heart failure secondary to myocardial infarction).  All SOTRs received grafts from brain-dead organ donors; there were no living donors reported. 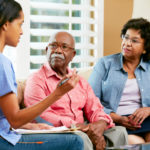