In a meta-analysis of 6 cohort studies including 86,137 IBD patients from Europe and Asia, the presence of IBD was significantly associated with a 33% increased risk for PCa over 4 to 40 years of follow-up. A subgroup analysis showed that men with ulcerative colitis (UC) had a significant 58% higher risk for PCa, whereas men with Crohn’s disease had a 12% higher risk. In addition, in 3 case-control studies that included 22,760 IBD cases and 300,851 IBD-free controls from the United States and the United Kingdom, men with IBD had an 81% higher risk for PCa.

“Our findings based on the large and multicenter samples strongly indicated that men with IBD especial UC have significant elevated PCa risk,” Yuqiu Ge, of the Wuxi School of Medicine, Jiangnan University, Wuxi, in Jiangsu, China, and colleagues concluded. “If confirmed in larger studies, future efforts should focus on understanding the basis for the link between IBD and total PCa or clinically significant PCa risk, including the possibility that IBD leads to an altered microbiome that increases PCa risk.”

The investigators said their findings suggest that increased PCa screening may be warranted for men with IBD. 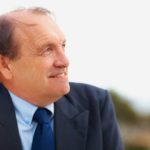 Apalutamide Plus ADT for mCSPC Maintains Health-Related Quality of Life