MIAMI – A phase 2 trial is enrolling patients with advanced or metastatic renal cell carcinoma (mRCC) to compare the combination of axitinib plus TRC105 with axitinib alone, according to a study presented at the 14th International Kidney Cancer Symposium 2015 (IKCS).

Because resistance to vascular endothelial growth factor (VEGF)-targeted therapy has become a major challenge in the contemporary treatment of patients with mRCC, and endoglin (CD105) activation may play an important role in the mechanism leading to this resistance, researchers are seeking to evaluate TRC105, an anti-endoglin monoclonal antibody. In preclinical models, TRC105 has been shown to potentiate the anti-tumor activity of bevacizumab, a VEGF angiogenesis inhibitor, and VEGF tyrosine kinase inhibitors.

A phase 1b study demonstrated that TRC105 at a dose of 10 mg/kg was well tolerated in combination with axitinib 5 mg twice daily in patients with RCC, as well as when axitinib was titrated to 10 mg twice daily.

“Partial response by RECIST 1.1 occurred in 29% of the 17 patients who progressed on prior VEGFR TKI, 4 of which were in the fourth-line setting, and in 59% by modified Choi criteria” said Toni Choueiri, MD, of Dana-Farber Cancer Institute in Boston, MA, said during the poster presentation. “Improved activity was seen in clear cell.”

In regard to safety, the most common adverse events with the combination were epistaxis, diarrhea, fatigue, headache, and gingival bleeding.

“The combination of TRC105 and axitinib demonstrated encouraging preliminary signs of activity including RECIST 1.1 partial responses in patients that were prior non-responders and doubling of the progression-free survival expected with axitinib as a single agent,” Dr. Choueiri said.

Now, researchers are actively enrolling patients in a multicenter phase 2 study, in which they plan to randomly assign 150 patients with clear cell RCC 1:1 to receive axitinib with or without TRC105. Primary endpoint for this study is progression-free survival, with overall response rate and disease control rate as secondary endpoints.

“Enrollment into phase 1b is complete and the phase 2 TRAXAR study is actively enrolling at approximately 30 sites in the United States.,” Dr. Choueiri concluded. 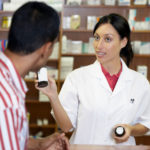