Of 43,143 patients with T2-T3 N0 RCC in the National Cancer Database who underwent radical nephrectomy, lymph node dissection was performed in 22%, and 6.7% of these patients were found to harbor positive lymph nodes. 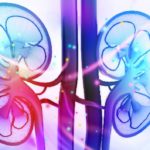