In this subgroup of patients, those with right-sided tumors had a significant 15% decreased risk of RCC-related death compared with those who had left-sided tumors after adjusting for multiple variables, Chin-Lee Wu, MD, of Massachusetts General Hospital in Boston, and colleagues reported in Cancer Medicine.

The study, based on information extracted from the Surveillance, Epidemiology and End Results (SEER) database, included 41,138 patients who underwent surgery for RCC from January 2010 to December 2014. Results showed that patients with right-sided RCC were more likely than those with left-sided RCC to have early-stage disease (I and II), a tumor size less than 4 cm, lower tumor grade, negative lymph node metastasis, and negative organ metastasis. These characteristics may contribute to the improved cancer-specific survival observed among patients with right-sided RCC in the subgroup of patients with 10 cm or larger tumors, according to the authors.

The new findings are consistent with those of a study published recently in Medicine and presented at the American Urological Association 2019 annual meeting in Chicago by Arne Strauss, MD, and colleagues. Their study included 17,709 surgical treated adult patients with RCC from the SEER database and 41,967 from the German Centre for Cancer Registry Data (ZfKD) database.  In the SEER and ZfKD datasets, left-sided tumors were significantly associated with approximately 19% and 16% increased risks of RCC-related death, respectively, compared with right-sided tumors, in adjusted analyses. 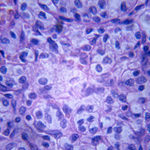