The most commonly reported adverse events were hypertension (24%), diarrhea (13%), fatigue (12%), palmar-plantar erythrodysesthesia (10%), and asthenia (9%).  However, Dr. Motzer noted that hypertension was approximately half as common as what had been observed in TIVO-1.

“As a stand-alone agent and in comparison to sorafenib, tivozanib looked very good, especially with its safety profile,” said Dr. Motzer.  “This is a wonderful thing because we really had very little to offer patients with kidney cancer 10 years ago.  It was considered to be a cancer with one of the highest unmet needs for treatment.  Based on our understanding of the underlying tumor biology and the development of these VEGF targeted therapies, we now have seven approved agents that are being looked at by the FDA for regulatory approval.”

Currently, clinicians have many options when it comes to managing patients with mRCC thanks to an expanding treatment armamentarium.  In most cases, controlled clinical trials can guide decision-making based on side effect profiles and lead to individualized treatment.  However, there is not a great deal of published data to guide clinicians in the management of older patients with comorbid conditions who have been diagnosed with localized RCC. Over the past 20 years, the incidental detection of small renal masses has been increasing, according to John Gore, MD, who is an assistant professor of urology at the University of Washington, Seattle, WA.  He addressed the issue of radical or partial nephrectomy for localized disease in elderly patients at the Genitourinary Cancers Symposium and remarked on the growing dilemma for clinicians as the aging U.S. population and the incidental detection of small renal masses simultaneously increase.

“Not every small renal mass needs to be treated.  We are trying to advance our understanding of which patients are good candidates for active surveillance,” said Dr. Gore.  “If a patient does appear to need treatment, then I would argue partial nephrectomy is the standard of care.”

Dr. Gore said management of small renal masses in adults 65 years of age and older can be challenging, but for patients who are eligible for surgery, anatomy—not a person’s age—should determine surgical approach.  He noted that not all renal masses are eligible for nephrectomy because some tumors have anatomic relationships that make nephron-sparking surgery inappropriate. 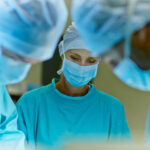