Doubling in KIM-1 plasma concentrations was associated with an increased risk of developing renal cell cancer (RCC) and poorer survival, according to results from a case-control study.1

“This is the first blood test to show relevance in kidney cancer,” Rapul Bhatt, MD, PhD, an associate professor of medicine at Harvard Medical School and a clinical fellow in hematology-oncology at Beth Israel Deaconess Medical Center in Boston, Massachusetts, and an author on the study, told Cancer Therapy Advisor.

KIM-1 is normally expressed at low levels by normal cells, but is upregulated in the kidney when renal tubules are injured. Prior studies demonstrated that KIM-1 levels are much higher than that of normal cells at the diagnosis of clear cell RCC. Furthermore, KIM-1 levels decreased post nephrectomy. “Our preliminary data and data from others show that KIM-1 is a marker that is elevated in people who have kidney cancer,” explained Dr Bhatt. “So our question was, can this potentially be looked at earlier prior to diagnosis?”

Dr Bhatt noted that this study “is part of a very important set of studies that will validate KIM-1, and the goal is to eventually have a biomarker for kidney cancer.” She said that another goal is to better apply plasma KIM-1 to patients who already have kidney cancer, such as following patients during therapy or to predict recurrence after nephrectomy.

The study included 190 patients with RCC and 190 controls within the population-based European Prospective Investigation into Cancer and Nutrition (EPIC) cohort. All cases included in this study donated blood up to 5 years prior to their RCC diagnosis. Controls were matched to each incident RCC case as it was diagnosed. Dr Bhatt noted that “KIM-1 is also elevated in people with benign kidney disease, such as renal failure, but that was probably matched between our 2 cohorts.” 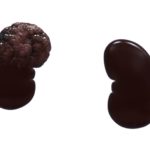