A new study has used pretreatment MRI-radiomic habitats and clinical features to predict response to radiation in a group of patients with soft tissue sarcoma.

Radiomic habitats are “analyses of overlaid images, providing insight on the underlying innate biology” of the disease. This study included 432 patients with nonmetastatic soft tissue sarcoma treated with neoadjuvant radiation followed by surgery from 2001 to 2019.

The researchers used preradiotherapy MRI and manually segmented gross volume on T1-post contrast and T2 STIR sequences. The sequences were dichotomized by signal intensity and each region was designated as 1 of 4 habitats:

The researchers used 2 training and 1 validation balanced subsets of patients. They developed a 6-feature model that included 4 radiomic and 2 clinical features — age and cN stage — that predicted for pathologic necrosis greater than 90%, which has been associated with improved outcomes in these patients.

Next, evaluating patients treated with neoadjuvant radiotherapy alone, a second model that included 5 radiomic features and 1 clinical feature (cT stage) had the highest prediction for pathologic necrosis of greater than 95%. In the training cohort, the accuracy was 76% with an ROC of 0.720; in the validation cohort, it was 76% and 0.663.

“In both the overall cohort and the radiotherapy only subset, the diversity of the number of habitat volumes within the tumor predicted for tumor response,” the researchers wrote. “Identifying radioresistant [soft tissue sarcoma] offers [an] opportunity for treatment intensification.” 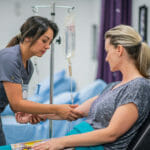