Tivozanib demonstrated antitumor activity and was well-tolerated among heavily pretreated patients with metastatic soft tissue sarcoma, according to a study published in the Annals of Oncology.1

For the 2-stage, open-label, phase 2 trial (ClinicalTrials.gov Identifier: NCT01782313), investigators enrolled 58 patients with metastatic, locally advanced, or locally recurrent soft tissue sarcoma to receive tivozanib orally daily for 21 days of each 4-week cycles until disease progression or unacceptable toxicity. Of those, 47% had leiomyosarcoma, 46% had received at least 3 prior lines of therapy, and 41% had received prior VEGF-targeted therapies.

Median follow-up was 9.6 months; results showed that 3.6% achieved partial responses and 54.5% had stable disease. No complete responses were observed.

The most common adverse events were fatigue, hypertension, nausea, and diarrhea. The most frequently reported grade 3 toxicity was hypertension, which was observed in approximately 22% of patients.

Further clinical trials are warranted to determine the optimal role of tivozanib in patients with soft tissue sarcoma. 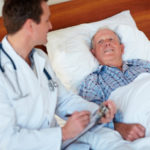