Among human immunodeficiency virus (HIV)-positive men, exposure to ultraviolet (UV) radiation may increase the risk for developing Kaposi sarcoma, according to a study published in the Journal of the National Cancer Institute.1

Previous research established UV radiation as an inducer of herpes simplex virus reactivation and as the primary risk factor for various dermatologic malignancies. But its relationship with human herpes virus 8 (HHV8) infection or risk of Kaposi sarcoma remains unclear.

To evaluate the association between UV radiation and Kaposi sarcoma, researchers analyzed data from 17,597 Caucasian and African American male veterans infected with HIV between 1986 and 1996. Of those, 422 were diagnosed with Kaposi sarcoma.

Patients with the highest exposure to UV radiation had a 49% higher risk of Kaposi sarcoma than those with lowest UV radiation exposure among the total population (HR, 1.49; 95% CI, 1.02-2.16).

These findings suggest that residing in locations with high ambient UV radiation at the time of HIV diagnosis may increase the risk for Kaposi sarcoma. Further investigation in a larger prospective trial is warranted. 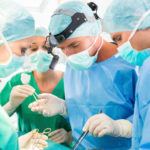 Resections for Wild-type GISTs Should Be Restricted to Initial Procedures