Patients with advanced melanoma can safely undergo anti–programmed death-1 (PD-1) therapy even after having experienced severe immune-related toxicities from prior treatment with ipilimumab, a new study out of France has confirmed.1

In the study, of these patients with previous immune-related adverse events (irAEs), only 1 in 5 experienced a grade 3/4 irAE, and there was an overall response rate of 43% to anti–PD-1 therapy.

Although ipilimumab is no longer the standard of care in the first line for patients with advanced melanoma, the study is relevant and interesting, according to Jeffrey M. Farma, MD, FACS, codirector of the Melanoma and Skin Cancer Program, and chief of the division of general surgery at Fox Chase Cancer Center, Philadelphia, Pennsylvania.

“We are still seeing patients who had received ipilimumab and had toxicities and then recur, and are subsequently treated with PD-1 therapy,” Dr Farma said.

The approval of ipilimumab in 2011 significantly changed the treatment of melanoma. Anti–cytotoxic T-lymphocyte antigen 4 (CTLA-4) therapy became the standard of care for patients with stage IV disease and in the adjuvant setting for stage III disease.

Ipilimumab was not without toxic effects, with as many as 70% to 88% of patients experiencing mild to moderate effects.2 Additionally, irAEs were found to occur in 5% to 25% of patients enrolled in clinical trials.

Anti–PD-1 therapy soon replaced ipilimumab as the standard of care, having shown higher tumor response rates and lower rates of immune-related toxicities, according to Dr Farma.

In the new study, researchers in France showed that patients who experienced severe irAEs during treatment with ipilimumab may have a reduced risk of these side effects and improved survival if they were re-treated with an anti–PD-1 therapy.

The study included 56 patients across 19 French melanoma referral centers. All patients had experienced severe irAEs after ipilimumab therapy and were then treated with anti–PD-1 therapy.

After receiving anti–PD-1 therapy, 36% of patients experienced at least 1 irAE associated with pembrolizumab (30%) or nivolumab (70%). Of the 21% of patients who experienced a grade 3/4 irAE, one-third presented with the same reaction they experienced with ipilimumab therapy.

Five patients had to discontinue anti–PD-1 therapy because of the adverse events, but more severe irAEs were resolved with corticosteroids (58%) and/or anti-tumor necrosis factor therapy (8%).

In all, 43% of patients responded to therapy, and the median overall survival was 21 months.

Commenting on the study, Georgina Long, MD, PhD, of the Melanoma Institute Australia and The University of Sydney, Australia, said that the results of this echo those of a study by her and her colleagues published in 2017 in Annals of Oncology.3 This retrospective study looked at the use of anti–PD-1 therapy in 119 patients with advanced melanoma and preexisting autoimmune disorders and/or major irAEs to ipilimumab.

In the 2017 study, 40% of patients with prior ipilimumab irAEs responded to anti–PD-1 therapy, and 34% developed new irAEs. Treatment discontinuation occurred in 12% of patients.

Instead, Dr Long said the more recent results should confirm that there is not a lot of crossover in toxicity of anti–CTLA-4 and anti–PD-1 therapy in those patients with prior toxicity on anti–CTLA-4. 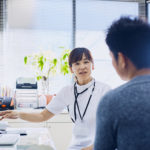 Use of ICIs for Advanced Melanoma in Taiwanese Patients