The objective response rate and the progression-free survival among patients with previously untreated advanced melanoma were significantly greater with nivolumab plus ipilimumab than with ipilimumab alone, a new study published online early in The New England Journal of Medicine has shown.

For the double-blind study, researchers sought to compare the safety and efficacy of ipilimumab and nivolumab combination therapy with ipilimumab monotherapy in patients with advanced melanoma who had previously not received treatment.

Researchers enrolled 142 patients with metastatic melanoma and randomly assigned them 2:1 to receive ipilimumab 3mg/kg plus either nivolumab 1mg/kg or placebo once every 3 weeks for four doses, followed by nivolumab 3mg/kg or placebo every 2 weeks until disease progression or unacceptable toxicity.

Results showed that among patients with BRAF wild-type tumors, the confirmed objective response rate was 61% in the combination group, of which 22% were complete responses, compared with 11% in the placebo group, none of which were complete (P < 0.001).

Researchers found that median progression-free survival was 4.4 months in the ipilimumab monotherapy group and had not been reached in the combination group (HR = 0.40; 95% CI: 0.23-0.68; P < 0.001). The median duration of response was not reached in either group.

In regard to safety, 54% of patients in the combination group experienced grade 3-4 drug-related adverse events versus 24% of those in the placebo group. The authors conclude that combination therapy had an acceptable safety profile. 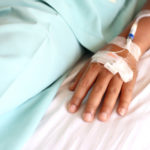