Being of obese body mass index (BMI) is associated with better outcomes among patients with metastatic melanoma treated with targeted or immunotherapy, according to a retrospective study published in Lancet Oncology.1

Jennifer L. McQuade, MD, MA, of The University of Texas MD Anderson Cancer Center in Houston, Texas, and lead author of the study, noted that the results were surprising. “We hypothesized that obesity would be associated with worse outcomes in patients with metastatic melanoma treated with immunotherapy and targeted therapy.”

Though multiple studies indicate that higher BMI is associated with an increased risk of developing or dying from different cancer subtypes, some observational studies suggest that overweight BMI may have a protective effect during cancer treatment.2 Morbid obesity, however, has been associated with poor outcomes. This phenomenon is referred to as the obesity paradox.

A higher BMI has been associated with an increased risk of developing melanoma, increased primary tumor thickness, and worse survival in a surgical resection cohort. This is the first study to evaluate the effect of BMI on outcomes of treatment for metastatic disease.

The retrospective study analyzed data from 6 cohorts including 1918 patients with metastatic melanoma who received treatment with targeted therapy, immunotherapy, or chemotherapy. Patients received dabrafenib plus trametinib or vemurafenib plus cobimetinib, ipilimumab plus dacarbazine, pembrolizumab, nivolumab, atezolizumab, or dacarbazine.

Outcomes were stratified by BMI at treatment initiation and classified according to the World Health Organization criteria of underweight (< 18.5 kg/m2), normal (18.5 to 24.9 kg/m2), overweight (25 to 29.9 kg/m2), and obese (≥ 30 kg/m2). Patients with underweight BMI were excluded from the analysis because of the small sample size.

While Dr McQuade pointed out that these results do not establish a causal relationship, the researchers “adjusted for other prognostic factors as well as medications that obese patents are more likely to take that might have anti-cancer activity (aspirin, statins, metformin, beta-blockers) — and the association between obesity and improved survival remained.” They also evaluated adverse events and, according to Dr McQuade, “if anything, they were slightly higher in the obese patients.” 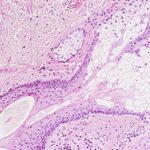 Immunotherapy for Metastatic Melanoma — In the Clinic