About 50% of patients with melanoma have tumors that carry BRAF mutations, of which the most frequent is BRAF V600E followed by V600K.1

This mutation affects several mechanisms of progression in melanoma including activation of downstream MEK/ERK pathways, inhibition of apoptosis, promotion of angiogenesis, and promotion of tissue invasion.

BRAF inhibitors improve progression-free and overall survival (PFS, OS) among these patients, but long-term benefit is limited by development of resistance in a majority of patients, as well as activation of the MAPK pathway.2

Combining a BRAF inhibitor with a MEK inhibitor overcomes some of these limitations and is a focus of recent research.

The COMBI-d study was a phase 3, double-blind, crossover study that investigated the efficacy of combined BRAF/MEK inhibition as first-line therapy in patients with advanced or metastatic melanoma. Researchers have recently published 3-year follow-up data from the trial.3

Cancer Therapy Advisor (CTA): Can you summarize the clinical significance of BRAF V600E/K mutations for patients with advanced or metastatic melanoma?

Dr Flaherty: Comparing melanomas that harbor V600 BRAF mutations to those that do not, there little difference with regard to prognosis. In other words, the clinical behavior of both genetic groups is about the same. What evidence there is regarding a difference in behavior suggests that BRAF-mutant melanomas are somewhat more aggressive in the metastatic setting, but I would not say that evidence really influences how we approach patients regarding their prognosis. Metastatic melanoma is pretty aggressive across the board.

In terms of treatment options, there is a clear difference between V600 BRAF mutant and BRAF wild-type melanoma — specifically, that there are multiple approved targeted therapies for the V600 BRAF mutant population that are known to improve survival and other outcomes.

Immunotherapy is available for patients with BRAF mutant and BRAF wild-type disease. The BRAF-mutant melanoma population has more options and more available lines of effective therapy. Additionally, there is emerging evidence that suggests BRAF inhibitor–based targeted therapy may be combined with immunotherapy. The available data come from phase 1/2 trials that led to the initiation of phase 3 trials testing these combinations. If successful, this could multiply the impact of each of these therapies.

CTA: Could you briefly describe the study design and patient population in COMBI-d? What additional information did the long-term follow up provide?

Dr Flaherty: The COMBI-d trial enrolled treatment-naïve metastatic melanoma patients who tumors harbored a BRAF V600E or V600K mutation. Patients could have a wide range of disease characteristics, but were not permitted to have active brain metastases at the time of enrollment.

Most notably, there was a clear difference in the percentage of patients who remained on therapy and without evidence of disease progression since the time of initial therapy on the combination arm vs the monotherapy arm.

This evidence of long-term benefit from the combination over monotherapy has significant ramifications for how this regimen is considered for patients who face multiple treatment options. 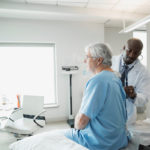