The US Food and Drug Administration (FDA) approved 2 topical calcineurin inhibitors (TCIs) — tacrolimus and pimecrolimus — for the treatment of atopic dermatitis in 2000 and 2001, respectively.1,2 But some case reports suggested that the medications might be linked to cancer, and a theoretical concern existed about their potential to mediate immunosuppression and increased cancer risk.3,4 As a result, the FDA issued a black box warning for this class of drugs in 2006.5

More recent research has also suggested that TCIs may indeed be tied to a higher risk of cancer. For example, a 2018 cohort study found that using topical tacrolimus and pimecrolimus was connected to an increased risk of lymphoma and skin cancer.6 The study was conducted in Europe and was funded by Astellas Pharma and LEO Pharma, both of which have sold tacrolimus (known as Protopic® and Prograf®).

But other studies have failed to confirm the existence of a link between the use of TCIs and greater cancer risk.7,8 One of the studies, published in 2015 in JAMA Dermatology, was conducted in the US and was funded by Valeant Pharmaceuticals International, now operating as Bausch Health, which sells Elidel® (pimecrolimus). Another study, published online in April 2020 in the Journal of the American Academy of Dermatology, was carried out in North America and Europe, and was funded by Fujisawa, Astellas Pharma, and LEO Pharma, all of which have been involved in selling tacrolimus at some point. That study was terminated early, with data collection ending in January 2019 — as the FDA’s approval was granted in 2018.

Now, analysis of the results of a postmarketing study examining whether there is a connection between the use of the medications and a greater risk of keratinocyte carcinoma found that there was no increase in the risk of this cancer.3 (The study, published in JAMA Dermatology, was also supported by a grant from Valeant.)

However, the design of the study precludes researchers from concluding with certainty that the drugs are not linked to an increased risk of keratinocyte carcinoma.

In their retrospective observational cohort study, the authors looked at 93746 people with atopic dermatitis or dermatitis. All participants were health plan members of Kai- ser Permanente Northern California. The mean age of participants was 58.5 years. The researchers divided the group into 3 subgroups: in the first group were those who took TCIs, with or without topical corticosteroids; in the second group were those who took corticosteroids only; and in the third group were those who were not exposed to either type of medication. (Corticosteroids had been the standard treatment before TCIs were approved.) The researchers’ main goal was to compare the first 2 groups; they then used the third group as an extra comparator group.

Of all the people in the study, 7033 received at least 2 prescriptions for TCIs, 73674 received at least 2 prescriptions for topical corticosteroids, and 46141 had no exposure to either type of medication during the mean follow-up of 7.70 years. The sum of these 3 categories was greater than the total cohort of 93746 people cited in the paper, so Cancer Therapy Advisor reached out to the lead study author and the journal editor for clarification.

The reason behind the discrepancy was that the investigators used a study design in which participants could move across exposure categories over time, Kanade Shinkai, MD, PhD, the editor of JAMA Dermatology, explained in an email.  Because of this design, a single patient could belong to multiple groups, she noted. (Dr Shinkai declared no conflicts of interest. However, she served as a mentor in the 2017 Women’s Dermatologic Society Mentorship Award program supported by Valeant.)9

Lead study author Maryam Asgari, MD, MPH, professor of dermatology at Harvard Medical School and dermatologist at Massachusetts General Hospital in Boston, explained in an email that a single patient could be counted in multiple groups, or “buckets,” in the study. “For example, if a patient is diagnosed with atopic dermatitis — but they are initially treated with topical emollient only, they would contribute time to the unexposed bucket,” she said. “Once they are given a topical steroid, they would move out of the unexposed and contribute time to the ‘topical steroid’ bucket. If they are given a topical calcineurin inhibitor, then they would move buckets and contribute time to that category.” Once a patient was exposed to 1 of the drugs, the researchers considered that patient to be exposed for the duration of the study, she said.

The information about the possibility of movement across the different buckets was not included in the paper describing the study. It is also unclear from the paper “how patients moved and how comparisons were made,” Leeza Osipenko, PhD, senior lecturer in practice in the department of health policy at the London School of Economics and Political Science, said in an email. This information was not found in the supplements to the paper.

Finally, it is not possible to determine by the end of the study how many patients, if any, were in the “never exposed” group of patients who received neither of the 2 drugs. 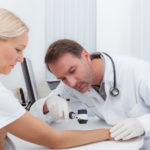