Rates of both melanoma and nonmelanoma skin cancer are increasing globally, and the number of annual skin cancer diagnoses in the United States now exceeds that of all other cancers combined.

These groups have the highest rates of exposure to risk factors including sunburn and tanning bed use. Studies have found that more than half of individuals age 18 to 24 years experienced sunburn in the past year, and this group also had the lowest rates of sun protection usage.2,3 Other findings showed that lifetime rates of indoor tanning usage were 55% and 19% among young adult college students and adolescents, respectively.4

Young women have an especially high risk for melanoma compared with young men because of their more frequent exposure to natural and artificial ultraviolet light.5 Avoidance of these risk factors could prevent 3 million cases of skin cancer each year, underscoring the need to improve public health communications regarding skin cancer risk and prevention.1

Some experts advocate the use of social media as a platform for such messaging, as this approach may be particularly effective in reaching young people because of their high engagement with social media, as 70% of teens use these sites.5 In addition, more frequent social media use has been linked with greater use of indoor tanning, and the indoor tanning industry uses social media sites to advertise directly to young people.

Similarly, social media sites also offer “public health advocates the opportunity to target health messages directly to those at highest risk and reach a large number of people at relatively low cost,” according to a recent review on the topic.5 “The public health community needs to work together with technology companies to develop creative ways to use social media to reach those at highest risk of cancer-causing behaviors.”

The authors propose the following key considerations in the development of such efforts:

Message content. Evidence indicates that appearance-based messages may be especially effective for skin cancer prevention, and posts that contain images are more effective than those that do not.

Timing. Online searches and social media posts pertaining to indoor tanning are most frequent between February and May in the United States, suggesting that this timeframe may be ideal for increased online prevention efforts.

Type of platform. Visual-oriented social media sites such as Instagram and Snapchat are especially popular among female adolescents, and young women are frequent users of Pinterest,1 suggesting that prevention-based efforts for these age groups may be most effective on these platforms.

Although more research is needed specifically regarding the use of social media to disseminate public health messages about skin cancer, previous studies have demonstrated the benefits of using technology-based interventions in general for this purpose. 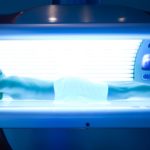 Frequency of Tanning, Risk for Melanoma Higher in Gym Tanners