One of the major cancer medicine success stories of 2011 was the FDA approval of vemurafenib (Zelboraf ®; Genentech/Daiichi Sankyo) for metastatic melanoma. For the first time in 30 years, vemurafenib, and an immunotherapeutic agent ipilimumab (Yervoy®, Bristol-Myers Squibb), showed significant survival benefit in the metastatic melanoma late-phase clinical trials and a possibility of improving the quality of life of patients.  Vemurafenib was also profiled in the 2011 American Society of Clinical Oncology (ASCO)’s Annual Report on Progress Against Cancer,1 and is now a new standard of care for the melanoma patients carrying the BRAF V600E mutation.

Melanoma is a cancer of pigmented skin cells called melanocytes.2 In rare situations, melanoma can also occur in the other pigmented tissues, such as the eye (uvea), gastrointestinal track (including mouth and anal wall), and vaginal wall. Metastatic melanoma is one of the deadliest known cancers. It is estimated that 70,000 patients were diagnosed with melanoma last year, and there were close to 9,000 deaths.3 The incidence of melanoma increased in males by 4.7% from 1990 to 2007.3 Sadly, metastatic melanoma patients generally have a grim prognosis with a ten-year survival rate of only 10%.4 It remains to be seen if the widespread adoption of vemurafenib in metastatic melanoma management will increase the survival odds for these patients.5

Vemurafenib is a specific inhibitor of the BRAF V600E gene which is expressed in the majority of melanomas.  BRAF V600E is an always-on mutant version of a cell signaling factor, B-RAF.  First discovered in the early ’80s as viral oncogenes, the RAF family of proteins are key components of the MAP kinase cell signaling pathway. 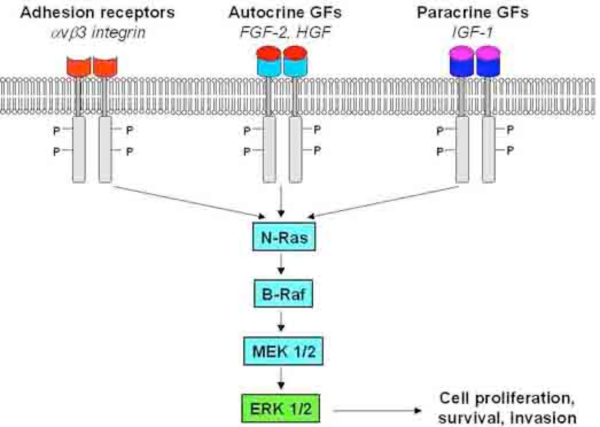 RAF proteins relay mitogenic signals originating at the cell surface receptor tyrosine kinases and lead to the activation of ERK transcription factors which are the genetic switches responsible for turning on the cell proliferation and survival genes in the nucleus. This RAS/RAF/MEK/ERK/MAP kinase signaling pathway is disregulated in numerous cancers with mutant oncogenic RAS and is found in nearly 15% of all human cancers.7

However, initial efforts to develop drugs targeting RAS or RAF-1 were futile, and it took another 10 years to discover activated B-RAF mutant forms in melanomas, colon carcinomas, and other cancers. In 2002, the scientists at the Wellcome Trust Sanger Institute analyzed over 500 cancer-cell lines and human tumor-derived cultures, and discovered that 80% of all melanomas, 12% of colon cancers, and 14% of ovarian cancers are driven by the BRAF V600E-mutant gene.7 In addition, this mutant gene was also discovered in glioma, sarcoma, lung, and breast cancer cell lines.7

After the discovery of the BRAF V600E cancer biomarker, it took just four years for the California-based Plexxikon, Inc., to discover a potent inhibitor of BRAF V600E, vemurafenib, and launch a clinical trial in metastatic melanoma patients. The results of the pivotal randomized multicenter clinical Phase III study BRIM3 (BRAF inhibitor in melanoma) trial, comparing vemurafenib with dacarbazine, the standard of care, in previously untreated metastatic melanoma patients, were presented at the ASCO 2011 meeting last May and were published one month later in the New England Journal of Medicine.8  Overall survival at six months was 84% (95% [CI], 78 to 89) in the vemurafenib group, and 64% (95% CI, 56 to 73) in the dacarbazine group. The interim analysis for overall survival and final analysis for progression-free survival showed that vemurafenib was associated with a relative reduction of 63% in the risk of death and of 74% in the risk of either death or disease progression, as compared with dacarbazine (P<0.001 for both comparisons). The median progression-free survival was 5.3 months for vemurafenib and 1.6 months for dacarbazine. 8

Zelboraf was FDA approved for metastatic melanoma on August 17, 2011. It is one of the few drugs to be approved in conjunction with an FDA-approved diagnostic test, the cobas® 4800 BRAF V600 Mutation Test.

Vemurafenib has been called the game-changer in melanoma management. The clinical response of 80% during early trials was unprecedented and so dramatic that it re-opened debate on the ethics of using a placebo arm in certain clinical trials where the control therapy amounts to nothing more than a statistical baseline. In September 2010, Amy Harmon, of the New York Times, profiled a story of two cousins who were participants in the vemurafenib (then called PLX4032) trial; one cousin received PLX4032, while the other was assigned through a computer lottery to the chemotherapy arm which is known to be ineffective and toxic.12 While cousin A had a dramatic response, the other cousin found his condition deteriorating rapidly, and he died. The ethics and usefulness of demonstrating that life extension (or survival) is the best end point for drug effectiveness in such trials, at this human (control group) cost, were called into question. Fortunately, in the post-vemurafenib world, we do expect that vemurafenib will be the floor against which newer drugs will be tested.

Most vemurafenib-treated melanoma patients eventually develop resistance to the drug. Thus, Plexxikon and co-developer Roche are now testing vemurafenib in combination with other signaling pathway inhibitors to preempt the development of tumor resistance. A combination trial testing vemurafenib and an MEK kinase inhibitor, GDC-0973, is underway.13 At the same time, clinicians and trialists have started focusing on using vemurafenib for any cancer type found to be driven by BRAF V600E. In this era of personalized medicine, decisions in cancer treatment are increasingly being guided by molecular markers rather than by tissue of origin or histopathology.

Metastatic Colon Cancer
The BRAF V600E allele is found in about 10% of colon cancers. Thus, in Phase I clinical trials, patients with BRAF V600E-positive colorectal cancer were given PLX4032 as a single agent. In spite of the high expectations, the results were disappointing. M.D. Anderson Cancer Center’s Scott Kopetz, MD, presented the results at the 2010 ASCO meeting in Chicago, Illinois. Only 1 patient out of 19 responded with a modest 30% tumor shrinkage, and in 4 others tumors shrank by at least 10%.14 This disappointing early experience is in part due to the presence of alternate signaling pathways driving colon cancer. Preclinical studies by Roche and Plexxikon scientists published in the December 2011 issue of Cancer Research suggest that vemurafenib in combination with other standard of care colon cancer drugs (e.g., capecitabine, cetuximab, bevacizumab, erlotinib, or irinotecan), may provide a greater clinical benefit.15

Leukemia
Hairy cell leukemia (HCL) is a rare malignancy of B lymphocytes accounting for less than 2% of all leukemias.  Abnormal projections on the surface of these abnormal cells give them a hairy appearance under the microscope.  The disease is characterized by marked splenomegaly and pancytopenia, but the patients have very good prognosis, with 10% never requiring any treatment.  Although there is no cure, decade-long remission periods are commonly observed using purine nucleoside analogues. Relapses are managed by another course of chemotherapy or biologics (e.g., interferon, rituximab), but subsequent remissions are of shorter duration, and some patients may not be ideal candidates for existing therapies. In the June 2011 issue of the New England Journal of Medicine, a team of Italian scientists from the University of Perugia in Italy published a study stating that the 47 HCL patients that they evaluated had the BRAF V600E mutation in their leukemic cells.16 This discovery has opened up the possibility of achieving a cure by adding vemurafenib to the existing therapeutic options.  Interestingly, BRAF V600E was not found in other peripheral B-cell lymphomas or leukemias, but was found in about 57% of the patients with Langerhans-cell histiocytosis, a rare proliferative epidermal cell disorder.17

In summary, vemurafenib is being considered for many different cancer types which share the BRAF V600E gene.  The development and adoption of whole genome sequencing of cancer biopsy samples as a routine clinical diagnostic test will aid in the selection of targeted therapies across various cancer types.18

No Mitotic Difference in Single or Multiple Primary Melanomas