Many patients with vitiligo undergo multiple courses of phototherapy, which may raise concerns about their risk of photocarcinogenesis. Previous studies have pointed to ultraviolet (UV) light as a cause of skin cancers, including melanoma.1,2 But a new study that examined long-term narrowband UV-B (NBUVB) phototherapy in Korean patients with vitiligo suggests that the treatment is not linked to an increased risk of skin cancer in this population.3

“Our data suggested that NBUVB phototherapy appears to be safe for patients with vitiligo in terms of the development of skin cancer,” the authors wrote in their paper.

The researchers looked at the incidence of actinic keratosis, Bowen disease, nonmelanoma skin cancer, and melanoma among study participants. They assessed whether NBUVB phototherapy was tied to an increased risk for any of these conditions using univariable and multivariable Cox proportional hazards regression models. 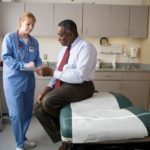