Ileus defined as nonmechanical obstruction of bowel usually secondary to inhibition of peristalsis.

Ileus can be caused by indolent factors such drugs or electrolyte abnormalities as well as abdominal catastrophes. In the ICU patient who may not be able to communicate change in toleration of enteral feeds, increased gastric output, distended abdomen, or decreased stool output should prompt investigation for cause.

Bowel obstruction in the ICU patient can have very similiar signs, such as abdominal distention, intolerance to feeds, increased gastric output and decreased flatus and stool. But often the distinguishing feature can be cramping abdominal pain and hyperactive or high pitched bowel sounds.

Gastric decompression with gastric tube. Resuscitation with isotonic fluid. No need for antibiotics for ileus or obstruction unless associated infectious cause or perforation suspected. Assess for intra-abdominal hypertension with bladder pressure. Correct electrolyte abnormalities, specifically potassium. Rule out life threatening cause of ileus (intra-abdominal sepsis) or small bowel obstruction with CT scan.

However, if obstruction has led to ischemia and intra-abdominal sepsis, the patient may have hypoactive bowel sounds. In a critically ill patient who is sedated and has impaired mental status, it may be difficult to elicit complaints of nausea or pain. Anasarca can mask abdominal distention. Obstipation and constipation may be overlooked as secondary to medications.

A high index of suspicion should be maintained in patients who develop high gastric tube residuals or become intolerant of tube feeding. Patients with electrolyte abnormalities are at a higher risk for paralytic ileus, as are multiple trauma, burn, and post operative patients, as well as patients with any inflammatory response. Patients who are status post abdominal surgical procedure can develop post operative bowel obstruction from adhesions.

The key is to distinguish ileus from obstruction as early as possible since small bowel obstruction can lead to ischemia and perforation.

CT scan with oral water soluble contrast can help distinguish ileus from obstruction and also determine partial vs. complete obstruction. CT scan can also reveal causes for ileus or obstruction such as pancreatitis, retroperitoneal bleed, mass or hernia. CT scan is also sensitive in assessing for ischemic bowel in cases of obstruction. (Figure 3)

Findings such as mesenteric edema, asymmetrical bowel wall enhancement, pneumotosis intenstinalisis and portal vein air are all signs of possible bowel ischemia. The whirl sign, when the mesentery of small bowel is wrapped around its vessel, is in some reports predictive of small bowel obstruction that will require surgery.

Most ileus care is supportive, treating the underlying correctable cause, if any. Since ileus can be caused by innumerable things, treating life threatening conditions such as infection and bleeding are first priority. Keeping electrolytes, especially potassium, normal is essential in these patients.

Removing dysmotility type of medications such as opiates, anticholenergics and calcium channel blockers may be helpful. Gastric decompression can help relieve abdominal distention and allow for more controlled account of output. It also may help with diaphragmatic excursion. The distended bowel can sequester large amounts of fluid, so fluid resuscitation may be necessary. Patient mobilization has mixed reviews for shortening duration of ileus.

In comparison, small bowel obstruction should be diagnosed as early as possible from ileus since the treatment for worsening clinical signs is most often surgical. Involvement of surgeon is paramount early in course especially for any complete or closed loop obstruction.

As the abdominal exam in critical ill patient is often nonspecific, close monitoring of pulse, minute ventilation, acid base, wbc and immature forms is critical. Lactate is often a late finding in intestinal ischemia and should not be used to rule it in or out as a single factor. Gastric decompression again maybe helpful. If there is no obvious finding of ischemic bowel on initial studies, there is no overwhelming data for antibiotics.

Parenteral nutrition support should be considered in patients at risk of malnutrition.

Because of the multifactorial cause of ileus, systemic and continued correction of underlying abnormalities such as electrolytes, withdrawal of contributive medications and nutritional support are the mainstay.

In low grade or intermittent obstruction, CT scan may be less sensitive, thereby presenting as an ileus. Therefore, prolonged ileus should have additional contrast studies such as repeat CT scan, small bowel follow through or enterolysis to r/o low grade obstruction.

Ileus mechanism is complex but thought to be multifactorial, including stress induced sympathetic (inhibitory) reflexes, inflammatory mediators and effects of medications. Although bowel may contract, the coordinated forward peristalsis is impaired.

At onset of intestinal obstruction, gas and fluid accumulate proximal to the obstruction. Initially, the bowel becomes hyperdynamic, peristalsing against the obstruction causing the classic colicky pain. As more fluid and gas accumulate, the bowel distends, causing rise in pressure against the bowel wall. The bowel motility decreases. If pressure becomes high enough, there will be decrease in microcirculation and resultant ischemia.

In one recent study, 16% of patients developed ileus while in the ICU. Approximately 300,000 patients undergo surgery for small bowel obstruction each year, most being secondary to adhesive disease. Hernia, malignancy and Crohn’s disease also are major causes.

Prognosis for ileus in the critically ill is based on underlying cause. However, delay in enteral nutrition has been shown to increase morbidity and trend to mortality.

The mortality rate for small bowel obstruction is dependent on co-morbidities and cause of obstruction. Without ischemia, the mortality has been quoted at 5%; however this markedly rises for ischemic or necrotic bowel.

Powered By Decision Support in Medicine.
Jump to Section
Next post in Critical Care Medicine 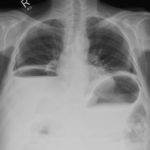