Are you sure your patient has Peptic Ulcer Disease? What are the typical findings for this disease?

Peptic ulcer disease is rare in children, accounting for 1 in 3000 hospital admissions.

Children and adolescents with ulcers usually complain of epigastric abdominal pain and vomiting. They may also present with hematemesis. Melena may be present when there is significant and brisk upper GI tract bleeding.

Upper GI endoscopy is the best approach to diagnosing peptic ulcer disease. Barium radiograpy has been replaced by endoscopy as the study of choice to confirm ulcer disease.

Although radiography can identify complications of ulcer disease, such as gastric deformities or scarring, the trend toward decreasing use of barium radiography in this setting has led to fewer pediatric radiologists with expertise in interpreting these studies, further lessening their value as a diagnostic tool.

A joint position statement from the North American and European Societies of Pediatric Gastroenterology addresses the evaluation and management of infection with H. pylori (discussed below).

Testing for H. pylori is not recommended in children with functional abdominal pain. The quality of evidence for this last recommendation was graded as high.

If you are able to confirm that the patient has Peptic Ulcer Disease, what treatment should be initiated?

Cytoprotective agents such as Sucralfate can be helpful if mucosal lesions are seen at endoscopy.

There are reports of increasing Clarithromycin resistance in several countries. At this time, testing for antibiotic susceptibility prior to initiation of treatment is recommended in regions where there >20% of H pylori strains are Clarithromycin resistant. Yet, for most hospitals, H pylori antibiotic susceptibility data is not available. Therefore, in this situation it is reasonable to initiate treatment with any of the first-line regimens, followed by a non-invasive test for H pylori eradication after 4-8 weeks of therapy.

If eradication of the organism has not been achieved, both the North American and European Society for Pediatric Gastroenterology (NASPGHAN and ESPGHAN) recommend pursuing further treatment using a different antibiotic regimen, or alternatively, using an even longer duration of treatment. Second-line antibiotic regimens can be tried empirically, but other options include endoscopy with biopsies for culture and antibiotic susceptibility testing to guide therapy, or performing flourescence in situ hybridation for Clarithromycin susceptibility on previously obtained biopsies.

When H pylori is detected by endoscopic biopsy, in the absence of peptic ulcer disease, the NASPGHAN and ESPGHAN consensus is to treat the infection, although the grade of evidence for this is low. The dilemma faced by the endoscopist is that there is not sufficient evidence to prove that the presence of H pylori alone (without ulcer formation) causes gastrointestinal symptoms. Thus eradication of the organism may not improve symptoms. However, the consensus to treat H. pylori infection was based on evidence that the presence of H pylori is associated with gastric malignancies, although this risk varies based on host and strain-specific factors.

Lansoprazole can cause headache and diarrhea.

Sucralfate can cause constipation and headache. It also can cause aluminum accumulation, and therefore sucralfate should not be used in children with renal failure.

What are the possible outcomes of Peptic Ulcer Disease?

The risks of untreated ulcer disease far outweigh the risk of available treatments, regardless of the etiology. The prognosis depends largely on the underlying cause. Addressing ulcerogenic causes such as NSAIDS or systemic illness are critical to treatment of ulcer disease. H. pylori, on the other hand, has been associated with treatment failure, antibiotic resistance and recurrence of ulcer disease.

Gastric and duodenal epithelial cells have a number of defenses against acid and pepsin. These include a protective layer of mucous over the epithelial lining, secretion of bicarbonate to buffer acid close to the cell surface, and ion pumps at the basolateral cell surface, which help regulate intracellular hydrogen ion levels. When defense mechanisms are interrupted, such as in the face of infection or states of physiologic stress, mucosal injury occurs. A peptic ulcer is a defect in the stomach or duodenum, extending into the muscularis mucosa layer.

The exact mechanism by which H. pylori causes gastric irritation is not known, but it is thought that the urease present in the bacteria plays a role. It hydrolyzes to bicarbonate and ammonia, increasing the gastric surface pH, which may interfere with production of protective mucous. Ammonia itself is toxic to gastric epithelial cells.

How can Peptic Ulcer Disease be prevented?

Peptic ulcer disease can be reduced by increased prescriber vigilance in the population taking NSAIDS regularly. Counseling to avoid unnecessary use of these medications as their gastrointestinal toxicity may be significant and unpredictable. If NSAID use is unavoidable, concomitant use of a proton pump inhibitor is recommended.

In regards to H. pylori, it is estimated that approximately 40-50% of the world’s population is colonized with this organism. A decrease in transmission of this bacteria is seen with use of clean water supply, refrigerated food, improved nutrition (diet containing ample fruits and vegetables) and improved hygiene and sanitation.

It is still unclear whether H. pylori causes pain in those patients without ulcer. The decision to treat H pylori gastritis in the absence of PUD has been controversial. The most recent recommendations by the North American and European society for pediatric gastroenterology are to treat H pylori infection detected by biopsy, even if ulcer disease is absent, because this may decrease the carcinogenic risk posed by certain strains of this organism.

Jump to Section
Next post in Critical Care Medicine 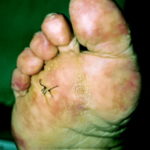