Annular elastolytic giant cell granuloma (AEGCG) is characterized by smooth-surfaced annular plaques with raised red borders and central hypopigmentation, occurring mostly on sun-exposed areas of the head, neck, and upper extremities. (Figure 1) Papular and reticulated variants have also been described. Lesions are usually asymptomatic. A history of excessive sun exposure is typically associated. The term actinic granuloma (of O’Brien) is often used for the typical lesions of AEGCG on sun-damaged skin. Involvement of non-exposed areas may also occur in AEGCG. Occasionally the plaques arise adjacent to scars from previous thermal burn injuries. 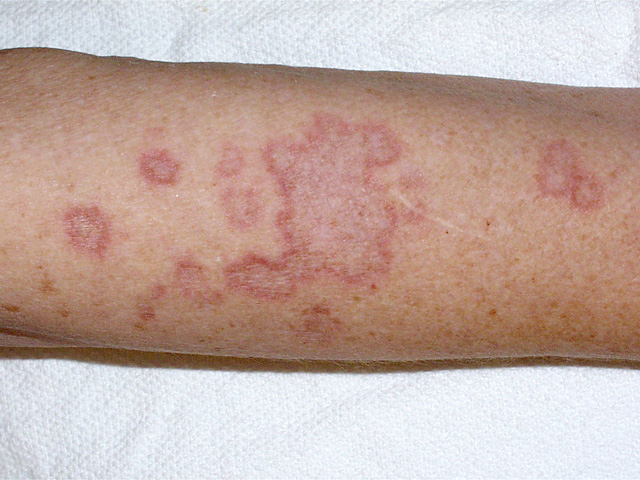 Granuloma annulare (GA) is the main entity in the differential diagnosis, both clinically and histopathologically. The relationship between GA and AEGCG is controversial, and some consider AEGCG to be a form of GA. Individual lesions of AEGCG are clinically very similar to GA, but AEGCG is more likely to occur in a photo-distributed pattern.

The histopathologic differences are most helpful in distinguishing the two entities. GA routinely demonstrates necrobiosis and mucin deposition, while AEGCG lacks both of these features. These histopathologic features, rather than elastophagocytosis, are most helpful in distinguishing AEGCG from GA. Elastophagocytosis is not specifically diagnostic of AEGCG. The phenomenon may be seen in biopsies of GA and other granulomatous cutaneous disorders.

The clinical differential diagnosis also includes other entities with annular lesions, such as tinea corporis, subacute lupus erythematosus, erythema annulare centrifugum, annular secondary syphilis, and elastosis perforans serpiginosa. These entities can generally be distinguished without difficulty from AEGCG by the histopathologic features. The histopathologic differential diagnosis of AEGCG includes mid-dermal elastolysis, cutis laxa, granulomatous mycosis fungoides, and granulomatous infections. These entities may typically be distinguished from AEGCG by the clinical features. To rule out granulomatous infections, special stains and/or cultures may be needed.

Who is at Risk for Developing Annular Elastolytic Giant Cell Granuloma?

Adults, age 40 to 70 years, are primarily affected. The female-to-male ratio is 2:1. AEGCG is rare in children and infants. Predisposing factors include excessive chronic sun exposure in many but not all cases. Prior thermal burn injuries are occasionally associated.

What is the Cause of Annular Elastolytic Giant Cell Granuloma?

Etiology and pathogenesis are unclear. A cell-mediated immune response may be directed against damaged elastic tissue fibers, but this theory is debated.

For patients with a single lesion or very few lesions of AEGCG, intralesional triamcinolone 3mg/mL is a reasonable first choice. Lidocaine cream 4% may be considered as a topical anesthetic prior to injection.

If intralesional injection is not feasible or not tolerated, topical calcineurin inhibitors are a second consideration (tacrolimus ointment 0.1% twice daily or pimecrolimus cream 1% twice daily). In prescribing topical calcineurin inhibitors, it should be noted that these medications carry an FDA black box warning, indicating that long0term safety has not been established, particularly with regard to a potential association with malignancy.

As a result, it is reasonable to discuss these concerns with the patient and to explain that therapy for AEGCG with tacrolimus ointment is off-label. In discussion with the patient, it can be determined whether the potential benefits of therapy outweigh the theoretical risks.

For small lesions in cosmetically appropriate areas, excision may be an option. For unresponsive or extensive lesions, systemic medications, such as pentoxifylline, antimalarials, or oral retinoids may be considered.

Reports in the literature suggest that a period of up to 6 months may be needed to assess a response to a systemic therapy. Therapeutic efficacy is, however, difficult to assess because spontaneous resolution, even rapid regression, may occur in untreated patients. The unpredictable benefit of therapy would need to be weighed carefully against the potential risk of adverse effects, particularly with systemic treatments such as cyclosporine.

The timing of follow-up depends mostly upon the potential risks of the selected therapy. Topical and intralesional treatments may require follow-up on a monthly basis to assess response to treatment. Higher-risk systemic medications may require close laboratory monitoring and more frequent follow-up.

Limas, C. “The spectrum of primary cutaneous elastolytic granulomas and their distinction from granuloma annulare: a clinicopathological analysis”. Histopathology. vol. 44. 2004. pp. 277-282. (Detailed report of 20 patients with AEGCG. The results support the view that AEGCG is a separate entity, distinct from granuloma annulare.)

Rongioletti, F, Baldari, M, Burlando, M, Parodi, A. “Papular elastolytic giant cell granuloma: Report of a case associated with monoclonal gammopathy and responsive to topical tacrolimus”. Clin Exp Dermatol. vol. 35. 2010. pp. 145-8. (Case report of a 43-year-old woman with a papular variant of elastolytic granuloma. Widespread papules were present on the trunk for 3 years. She had a concurrent IgG lambda monoclonal gammopathy, for which she received no specific treatment. For the AEGCG, tacrolimus ointment 0.1% was applied twice daily. Marked improvement was noted after 2 months of treatment.)

Ratnavel, RC, Grant, JW, Handfield-Jones, SE, Norris, PG. “O'Brien's actinic granuloma: response to isotretinoin”. J R Soc Med. vol. 88. 1995. pp. 528P-9P. (Case report of an elderly man with enlarging disfiguring plaques of AEGCG on the face and neck. Previous treatments with intralesional and topical corticosteroids had not been beneficial. The initiation of isotretinoin 0.5 mg/kg/day PO was associated with resolution of the newest lesions of AEGCG and improvement of longstanding lesions. After 12 weeks of treatment, isotretinoin was discontinued due to liver enzyme elevation and lethargy. Eight weeks after stopping treatment, he developed 2 new lesions of AEGCG.)

Ventura, F, Vilarinho, C, daLuz Duarte, M, Pardal, F, Brito, C. “Two cases of annular elastolytic giant cell granuloma: different response to the treatment”. Dermatol Online J. vol. 16. 2010. pp. 11(Description of two patients with AEGCG on the back and extremities. The first patient, an elderly woman, experienced complete resolution of lesions after 3 weeks of betamethasone dipropionate cream. The second patient, an elderly man, failed treatment with topical corticosteroids and PUVA. Subsequent treatment with hydroxychloroquine 400 mg by mouth daily was associated with improvement by 4 months. The treatment was discontinued due to early retinopathy. Cyclosporine 200 mg by mouth daily was then initiated. The patient experienced complete clearing over the next 7 months.)

Takata, T, Ikeda, M, Kodama, H, Ohkuma, S. “Regression of papular elastolytic giant cell granuloma using narrow-band UVB irradiation”. Dermatol. vol. 21. 2006. pp. 77-9. (Case report of an elderly Japanese man with papular elastolytic giant cell granuloma involving the dorsal hand and back. Localized narrow-band UVB was administered to the hand at 100 mJ/cm2 and was repeated four times on a weekly basis at 200mJ/cm2. The hand lesions nearly resolved. The localized narrow-band UVB was then similarly administered directly to the back lesions over 6 weeks and was associated with complete resolution of the back lesions.)

Lee, LW, Lee, MW, Choi, JH, Moon, KC, Koh, JK. “Annular elastolytic giant cell granuloma in an infant: improvement after treatment with oral tranilast and topical pimecrolimus”. J Am Acad Dermatol. vol. 53. 2002. pp. S244-6. (Case report of an 8-month-old infant boy with widespread AEGCG on the extremities and trunk. Concurrent administration of pimecrolimus 1% cream twice daily for 4 months and oral tranilast 5 mg/kg/day for 3 months was associated with resolution of lesions. Tranilast is an anti-allergic drug that inhibits release of chemical mediators from mast cells and affects the release of cytokines by monocytes and macrophages.)

Kelly, BJ, Mrstik, ME, Ramo-Caro, FA, Iczkowski, KA. “Papular elastolytic giant cell granuloma responding to hydroxychloroquine and quinacrine”. Int J Dermatol. vol. 43. 2004. pp. 964-6. (Case report of an elderly man with widespread lesions of elastolytic giant cell granuloma (papular variant) on the trunk, extremities, and face. Initial treatment with hydroxychloroquine 200 mg by mouth twice daily was associated with a 75% improvement. The hydroxychloroquine was discontinued due to ophthalmologic side effects. The skin lesions rebounded within 6 months after the discontinuation of therapy. Quinacrine 100 mg by mouth daily was then started and was associated with a noticeable improvement in his lesions within 3 months.)