Necrolytic acral erythema (NAE) is a cutaneous marker of Hepatitis C viral infection (HCV). In the absence of HCV, one should consider other diagnoses in the differential. The diagnosis of NAE often precedes that of HCV, and presence of NAE should prompt the clinician to test for HC. It is recommended to first do an antibody test (EIA-2 and 3) and if positive perform a confirmatory HCV RNA molecular assay. RIBA testing may be used to distinguish between HCV RNA negative patients to determine false positive antibody tests and recovered HCV infection.

Classically, NAE involves the dorsal feet, but can affect the hands, ankles, legs, and knees; less common sites include the elbows, genitalia, and buttocks. Palms, soles, and nails typically are spared, but rare cases have been reported. Lesions can be painful and most patients describe pruritus and burning, which are useful clues in the history.

Laboratory work-up should focus on evaluating for underlying liver disease, especially for HCV infection. Hepatitis serologies and liver function tests (including aspartate aminotransferase, alanine aminotransferase, total bilirubin, Lactate dehydrogenase, and alkaline phosphatase) should be performed. Transaminitis due to HCV may be seen.

A glucagon and zinc level should be performed to distinguish NAE from necrolytic migratory erythema and acrodermatitis enteropathica, respectively. Serum albumin and amino acids levels should be evaluated as these may be low with NAE. A check of biotin, free fatty acids, and Vitamin B3 should be performed to rule out other similar conditions that mimic NAE, due to deficiencies in these nutrients.

A skin biopsy of NAE will vary depending on the stage of disease (Figure 3, Figure 4). Early lesions show epidermal thickening and spongiosis with inflammation around the superficial vessels of the dermis. Later stages reveal distinctive epidermal pallor, psoriasiform hyperplasia leading to clubbing of the rete pegs, prominent papillae elevating the skin’s surface, retention of nuclei in the corneal layer, subcorneal pustules, and necrotic keratinocytes.

These findings are nonspecific for NAE and are commonly seen in other nutritional deficiencies, and thus must be correlated clinically. However, the focal nature of epidermal dyskeratosis and pallor, along with basal cell vacuolar degeneration can be useful in distinguishing NAE from other clinical mimickers, such as psoriasis. Skin biopsy is useful when the previously mentioned laboratory values are not helpful.

There is little value in other imaging studies.

Characteristic findings that distinguish NAE from other similar conditions listed above include:

The question of whether NAE is simply a variant of NME linked with HCV is an area of debate in the literature.

NAE is a rare disease, with fewer than 100 cases reported in the literature (although some feel the disease is underreported). Males and females are affected equally and the mean age of those affected is 41.7 years.

NAE was first described in the 1990s in Egypt, and subsequent reports suggest that the incidence of NAE in Egypt and the surrounding region is high – presumably due to higher rates of HCV infection.

The biggest risk factor for NAE is HCV and any patient presenting with a condition suspicious for NAE should be tested for HCV. In one study, 4 out of 5 patients with NAE were found to be diabetic, though this could be secondary to complications from HCV. No cases of NAE have been reported with Hepatitis A or B. Necrolytic migratory erythema has been associated with Hepatitis B.

The cause of NAE is unknown, though the metabolic derangements from an HCV-infected liver are believed to play a role. Of interest, the level of liver damage as assessed by liver enzymes has not been consistently correlated with disease activity.

Several theories have been proposed regarding the etiology and pathophysiology of NAE including hypoaminoacidemia, hyperglucagonemia, hypoalbuminemia, and low serum zinc levels.

Low amino acid levels in the setting of high glucagon levels, both results of liver damage, may impact the levels of anabolic proteins in the epidermal layer leading to decreased synthesis of new keratinocytes and necrolysis from imbalanced protein metabolism. However, low levels of amino acids are not consistently found in NAE and amino acid infusions have not been consistently useful in treating NAE.

Trauma to the acral areas may release acrachidonic acid, and in the presence of high glucagon levels may lead to the characteristic distribution of NAE. However, koebnerization is not characteristic of NAE and glucagon is not consistently elevated.

Low albumin could lead to elevated prostaglandins, causing inflammation. Albumin is a carrier of zinc and essential fatty acids; therefore, low albumin levels cause decreased amounts of these molecules. Hypoalbuminemia has been found in a few patients, but not in the majority.

Subclinical zinc deficiency may lead to apoptosis of cells as zinc has antiapoptotic properties. One study showed decreased zinc levels in the epidermal layer as well as in the serum, though this is not always the case. Low zinc is thought to play a role as replacement leads to improvement in the skin.

The importance of recognizing NAE is in making sure that HCV has been diagnosed and appropriate treatment initiated. There are no direct systemic effects of NAE per se, but it serves as a cutaneous marker of HCV.

Inquire about risk factors for Hepatitis C (intravenous drug use, transfusion history, unprotected sexual intercourse) and perform appropriate laboratory testing as discussed above. Inquire and evaluate for the stigmata of liver disease such as jaundice, ascites, confusion, asterixis, gynecomastia, spider telangiectasias, renal dysfunction, varices, and excessive bleeding. Explain the association of HCV with NAE and the natural course of each to the patient. Explain that NAE may resolve despite the persistence of HCV in the body and that GI follow-up is paramount

Evaluate for impairment in quality of life due to both disease processes. Discontinue any hepatotoxic exposures (alcohol, medication [eg, acetaminophen], wild mushroom, or chemical use) that may further damage the liver. Refer to a GI specialist/ hepatologist to further evaluate the liver and rule out cirrhosis and/ or hepatocellular carcinoma

Initiate combination interferon alpha and ribavirin therapy per GI recommendations as tolerated by the patient. Near complete response of NAE should be seen within several months or sooner. In addition to the combination antiviral therapy, initiate concurrent oral zinc therapy (220mg bid). Improvement and sometimes resolution can be seen within several weeks. This is most effective in patients with low-normal zinc levels. Zinc therapy may be used alone in those who are nonresponsive to combination antiviral therapy alone or in situations where antivirals are contraindicated. Intralesional and topical high potency steroids and oral amino acid replacement have shown minimal efficacy in some cases but should be considered adjunctive treatment in resistant cases.

Patients should be monitored every few weeks to evaluate for improvement with the combination antiviral and zinc therapy. The patient needs to continue to see a GI specialist or hepatologist despite improvement in skin as liver disease may persist. This must be clearly communicated to the patient and family. The patient should be told to monitor for the stigmata of liver disease in order to prevent its progression. The patient’s skin must be monitored for secondary infection of skin lesions.

The risks of each therapeutic modality must be explained to the patient. Interferon alpha and ribavirin may cause serious reactions such as myelosuppression and psychosis, but more common reactions include flu-like symptoms, nausea/ vomiting, and rash. Excessive zinc supplementation can cause nausea, vomiting, loss of appetite, abdominal pain, diarrhea, and headache.

Seronegative disease (NAE in the absence of identifiable HCV infection), though rare, has been reported, and such patients should be treated with zinc therapy only, with or without amino acid supplementation and topical corticosteroids.

NAE may occur in atypical sites, such as the trunk and nails, and should be included in the differential diagnosis in patients presenting with NAE-like lesions in these areas.

Geria, AN, Holcomb, KZ, Scheinfeld, NS. “Necrolytic acral erythema: A review of the literature”. Cutis. vol. 83. 2009. pp. 309-14. (This is an excellent review of NAE's pathogenesis, clinical presentation, histopathology, and treatment.)

Panda, S, Lahiri, K. “Seronegative necrolytic acral erythema: A distinct clinical subset”. Indian J of Dermatol. vol. 55. 2010. pp. 259-61. (This paper discusses a case of seronegative NAE that benefitted from zinc and topical steroid therapy and raises the question whether this is a distinct sub-type of NAE with a unique clinical presentation.)

Bentley, D, Andea, A, Holzer, A, Elewski, B. “Lack of classical histology should not prevent the diagnosis of necrolytic acral erythema”. J Am Acad Dermatol. vol. 60. 2009. pp. 504-7. (This paper presents a case report of NAE that closely mimicked psoriasis both clinically and histologically. It also provides a good review of the literature and histology of the disease.)

Nofal, AA, Nofal, E, Attwa, E. “Necrolytic acral erythema: A variant of necrolytic migratory erythema”. Int J Dermatol. vol. 44. 2005. pp. 916-21. (This paper discusses the controversy about whether NAE is a variant of NME linked with HCV and discusses how to separate NAE from other diagnoses on the differential. It also discusses the role of albumin in NAE.)

Moneib, HA, Salem, SA, Darwish, MM. “Evaluation of zinc level in the skin of patients with necrolytic acral erythema”. Br J Dermatol. vol. 163. 2010. pp. 476-80. (The authors compared 15 patients with NAE to healthy controls and found that the NAE group had significantly lower zinc levels in the skin and serum.)

el Darouti, M, Abu el Ela, M. “Necrolytic acral erythema: a cutaneous marker of viral hepatitis”. Int J Dermatol. vol. 35. 1996. pp. 252-56. (This is one of the original papers that describes NAE and its relationship to HCV. It also discusses the theory that low amino acids and high glucagon lead to epidermal protein depletion and necrolysis.)

Hivnor, CM, Yan, AC, Junkins-Hopkins, JM. “Necrolytic acral erythema: response to combination therapy with interferon and ribavirin”. J Am Acad Dermatol. vol. 50. 2004. pp. S121-S124. (This is a case that reported a pediatric patient whose NAE resolved with hyperalimentation of protein and zinc and combination antiviral therapy despite a persistently high viral load. It also provides an example of NAE with a normal zinc level.) 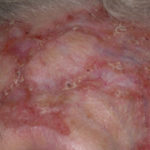