The age of onset for Papillon-Lefévre syndrome (PLS) is usually between 1-5 years. Be alert for thickening, dryness and fissuring of palms and soles, aggravation during winter, loosening followed by loss of deciduous teeth by the age of 5, loss of permenant teeth by the age of 17 if not treated, excess perspiration, increased sweating of the palms and soles that can be foul smelling, frequent skin infections, and thickening and discoloration of nails. The presence of palmoplantar keratoderma, and periodontosis with loss of teeth is highly suggestive of PLS.

Characteristic findings include symmetrical, well-demarcated, erythematous keratotic and confluent plaques, usually diffuse and sometimes punctate, affecting the entire surface of the palms and soles and extending to the dorsa of hands and feet and occasionally on to the skin overlying the achilles tendon and external malleoli (Figure 1, Figure 2). Other sites that may be affected include legs, thighs, axillae, eyelids, cheeks, and labial commissures.

Other findings include severe gingival inflammation where the gingiva appears bright red and edematous and bleeds easily, dental caries, dysplastic and malformed teeth (Figure 3), degeneration of the structures that surround and support the teeth, fetor ex oris, premature exfoliation of primary dentition by the age of 4 years followed by premature exfoliation of permenant teeth by the age of 13-16 years due to gingivitis and periodontitis, loss of alveolar bone, pyogenic skin infections, nail dystrophy and increased curvature of nails, long and thin fingers and toes (arachnodactyly), flat feet, pes planus, hypertrophy of the fingernails and toenails ( onychogryphosis), and abdominal tenderness of right upper quadrant suggestive of pyogenic liver abcess.

Orthopantomogram (OPG View ) shows resorption of alveolar bone, giving it a “floating-in-air” appearance. An x-ray of the skull skull may reveal calcification of falx cerbri, dura, choroid plexus and tentorium cerebelli, while x-ray of the hands and feet may show resorption of the phalanges (acro-osteolysis). Ultrasound of the abdomen/computed tomography (CT) abdomen can be used in cases of suspected liver abcess.

An allelic variant of PLS, called as Haim-Munk syndrome or Cochin-Jewish disease, is a rare autosomal recessive disorder first described in Cochin Jews and is characterized by acroosteolysis. arachnodactyly, and onychogryphosis in addition to palmoplantar keratoderma and periodontosis. Prepubertal periodontosis is another allelic variant of PLS and is characterized by absence of palmoplantar keratoderma

PLS is a rare autosomal recessive condition in which both parents can be phenotypically healthy with a negative family history of the disease. Both parents must carry the autosomal gene for the syndrome to appear in the offspring. When both parents are carriers there is 25% chance of producing an affected offspring.

There is no epidemiological variation in the distribution of the syndrome. Epigenetic defect in gene loci and environmental factors can contribute to the pathogenesis and increases the susceptibility to infections.

Mutation of Cathepsin C gene localized to chromosome 11q14-21 encoding for lysosomal protease. This gene is expressed in the commonly affected epithelial regions such as palms, soles, knees, keratinised oral gingiva, and osteoclasts, and also expressed in the immune cells including polymorphonuclear cells, macrophages and their precursors.

Cathepsin C is a lysosomal protease which processes and activates several granule serine proteases critical to immune and inflammatory responses of myeloid and lymphoid cells.

Neutrophil chemotaxis, phagocytosis and bactericidal activities are impaired. Infectious agents such as actinomyces actinomycetemcomitans, a virulent anerobic gram-negative pathogen, can cause periodontal damage and alteration in polymorphonuclear neutrophil function. Reactivity to B cell and T cell mitogens is impaired.

A multidisciplinary approach is advisable.

An optimal approach begins with counselling and educating the patients and family about the nature of the disease. Regular application of emollients is required, especially during winter, as hyperkeratosis is aggravated during winter. Maintaining good oral hygiene is vital.

Systemic retinoids like acitretin are beneficial in reducing periodontal disease and gingivitis, thereby helping in preservation of teeth. Retinoids are also used as crisis management for palmolantar keratoderma, especially during winter aggravation. Retinoids are highly beneficial but not curative. Although etretinate was extensively used for periodontosis, because of high lipophilicity it remains in the tissues for prolonged periods, thereby increasing the risk for terratogenecity. Etretinate has now been replaced by Acitretin. Systemic antibiotics fare administered or pyogenic skin infections and liver abscess.

Patients require lifelong use of emollients for palmoplantar keratoderma. Maintaining good oral hygiene and frequent visits to the dentist are essential. Female patients of reproductive age group on retinoids should be advised on usage of contraceptive measures, due to the risk of terratogenecity.

Patients should be informed of the need for regular monitoring of the following tests (Table I), because retinoids are known to increase triglycerides, cholesterol and liver enzymes. Rarely, it can also cause ocular side effects like reduced night vision and persistent dry eyes, and skeletal effects like diffuse skeletal hyperosteosis and premature epiphyseal closure.

Lee, MR, Wong, LF, Fischer, GO. “Papillon-Lefevre syndrome treated with acetetin”. Australasian J Dermatol. vol. 46. 2005. pp. 199-201. (Successful treatment of palmarplantar keratoderma and periodontosis with acetretin and prophylactic antibiotics is reported. Treatment with acetretin at an earlier age before the onset of permanent teeth will prevent loss of permenant teeth and is a safe treament in children.) 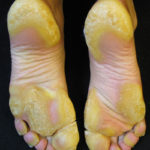