How can I be sure that the patient has infectious esophagitis?

Esophageal infections occur primarily in patients whose immune system has been compromised severely as, for example, by organ transplantation with the administration of potent immunosuppressive drugs, by acquired immunodeficiency syndrome (AIDS), by chemotherapy, or by advanced malignancy.

Although the esophagus is susceptible to infection by a host of fungi, viruses, bacteria, and parasites, most infectious esophagitis is caused by only three microorganisms: candida, herpes simplex virus (HSV), and cytomegalovirus (CMV). Odynophagia (pain on swallowing) and dysphagia (difficulty with swallowing) are the typical presenting symptoms of infectious esophagitis.

Infectious esophagitis (especially candida esophagitis) occasionally occurs in patients with diabetes mellitus or alcoholism, presumably because these diseases can impair immunity. Antibiotics and corticosteroid therapy both can predispose to candida esophagitis, as can abnormalities that delay the clearance of candida from the esophageal lumen such as progressive systemic sclerosis (scleroderma), achalasia, and esophageal strictures.

What are the usual constellations of clinical features?

A tabular or chart listing of features and signs and symptoms

Are there pathognomonic or characteristic features?

What are some less common clinical presentations?

No clinical feature of infectious esophagitis is sufficiently distinctive to establish the identity of the offending organism reliably. Furthermore, in patients with AIDS, the esophagus frequently is infected simultaneously with multiple pathogens, and an esophageal ulceration initially caused by one microorganism may become secondarily infected by another. The establishment of a specific diagnosis of esophageal infection generally requires esophageal biopsy.

How can I confirm the diagnosis?

What tests should be ordered first?

The diagnosis of infectious esophagitis usually is established by endoscopy with esophageal biopsy.

Candida esophagitis has a characteristic endoscopic appearance with raised, white plaques that resemble cottage cheese clinging to the esophageal mucosa. This material cannot be washed away readily, and the friable underlying mucosa frequently bleeds when the adherent plaques are dislodged by contact with the endoscope or biopsy forceps. Confirmation of the diagnosis of candida esophagitis requires the demonstration of budding yeast cells, hyphae, or pseudohyphae in esophageal biopsy specimens.

The endoscopic findings in HSV esophagitis vary with the interval between esophageal infection and endoscopic examination. The earliest lesions, which are seldom observed, are small (1-3 mm) rounded vesicles, often in the mid- to distal esophagus. When the vesicles slough, the lesions become small ulcers that have raised margins and a yellowish base. The mucosa between the ulcerations usually appears normal. In some cases, the small ulcers coalesce to form larger ulcers that can be covered with dense exudates.

HSV infects the esophageal squamous epithelial cells and, therefore, histologic confirmation of HSV esophagitis is accomplished by obtaining biopsy specimens from the squamous epithelium at the edges of ulcerations. Typical histologic changes of HSV infection include multinucleated giant cells and intranuclear (Cowdry type A) inclusion bodies.

CMV typically causes discrete, large esophageal ulcerations (up to 15 cm in length) that are surrounded by normal-appearing esophageal mucosa. The virus infects fibroblasts and endothelial cells and, therefore, biopsy specimens should be obtained from the granulation tissue in the base of the esophageal ulcer rather than from the squamous epithelial cells (that do not harbor the virus) at the edges of the ulcer. Cells infected with CMV have distinctive histological abnormalities that include cellular enlargement (cytomegaly) and inclusion bodies within the nucleus. Unlike the inclusion bodies of HSV infection that are found only within the nucleus, CMV-infected cells exhibit granular inclusion bodies in the cytoplasm as well.

What tests should be used to confirm the initial tests?

The diagnosis of infectious esophagitis usually is established by histological examination of esophageal biopsy specimens, and biopsy specimens are not sent for culture routinely. A culture positive for candida does not distinguish among esophageal infection, esophageal colonization, and specimen contamination by this yeast. Viral culture may be more sensitive than histological examination for diagnosing HSV and CMV esophagitis, but culture is not usually deemed necessary for diagnostic purposes in clinical practice except in equivocal or unusual cases, or in cases that do not respond to initial antimicrobial therapy.

What tests are useful if the diagnosis is still in doubt?

Polymerase chain reaction (PCR) testing can detect HSV and CMV DNA in biopsy specimens, and serological tests are available for the diagnosis of CMV infection. However, these tests generally are not required if biopsy specimens of esophageal ulcerations reveal characteristic histological findings. PCR testing is not usually deemed necessary for diagnostic purposes in clinical practice except in equivocal or unusual cases, or in cases that do not respond to initial antimicrobial therapy. Table III lists some of the microorganisms that have been reported to cause esophageal infections in addition to candida, HSV, and CMV.

What other diseases, conditions, or complications should I look for in patients with infectious esophagitis?

What are the major risk factors for patients with infectious esophagitis?

See Table I for a listing of risk factors for esophageal infection.

What diseases may occur with infectious esophagitis?

Infectious esophagitis in AIDS. For patients infected with the human immunodeficiency virus, infectious esophagitis is uncommon until the patient is profoundly immunosuppressed with CD4 counts below 200 cells/mm3. Candida is by far the most common cause of esophageal infection in AIDS. Although CMV and HSV infections also are frequent in AIDS, these viruses often are not the sole pathogens that can be identified in the inflamed esophagus.

CMV often is discovered in biopsy specimens taken from an esophagus that is also infected by candida, and simultaneous infections with both CMV and HSV are not rare. Although simultaneous esophageal infections with CMV and candida are common, the CMV does not appear to contribute significantly to the esophageal inflammation, in most cases because most patients with mixed CMV and candida infection of the esophagus respond well to antifungal therapy alone.

After the primary infection, latent CMV infection persists in virtually every organ and, with the development of immunodeficiency, the latent virus can be reactivated to cause esophagitis. Alternatively, immunocompromised patients can develop CMV esophagitis during primary CMV infections acquired, through the transfusion of blood or the transplantation of organs that harbor the latent virus. Preventive strategies for CMV infection in organ transplant recipients include the administration of antiviral agents (e.g., valganciclovir or ganciclovir) or frequent monitoring for viremia.

What complications of infectious esophagitis are commonly encountered?

Complications of infectious esophagitis can develop when the infection causes deep ulcerations of the esophagus. Hemorrhage results when deep ulcerations erode into large blood vessels. Rarely, infectious esophageal ulcerations may perforate, or they may penetrate into adjacent organs to form esophago-bronchial or esophago-mediastinal fistulae. The onset of coughing with swallowing suggests the development of an esophago-bronchial fistula. Healing of deep esophageal ulcerations can be accompanied by fibrosis and esophageal stricture formation. Fortunately, all of these complications are uncommon.

What is the right therapy for the patient with infectious esophagitis?

What treatment options are effective?

Esophageal infections usually occur in the setting of profound immunosuppression. If it is possible to safely discontinue any medications contributing to immunosuppression (e.g., corticosteroids) or to reverse the underlying condition causing the immunocompromise (e.g., by administering highly active antiretroviral therapy to patients with AIDS), doing so will likely improve the outcome of treatment for infectious esophagitis.

Treatment of CMV esophagitis. CMV infections often occur within 4 months of organ transplantation if patients are not given prophylaxis, and within 4 months of discontinuing prophylaxis. The clinician should consider decreasing or stopping some immunotherapeutic agents in this setting, and the risks of continuing immunotherapy in the presence of CMV infection must be balanced against the risk of transplant rejection if immunotherapy is stopped. Agents available for the treatment of CMV infection include ganciclovir, valganciclovir, foscarnet, and cidofovir.

What is the most effective initial therapy?

Treatment of candida esophagitis. Initial treatment is commonly oral fluconazole given as a 400-mg loading dose, followed by 200 to 400 mg daily for 14 to 21 days. Azoles are teratogenic, however, and should not be used in pregnant women, at least not during the first trimester.

Treatment of CMV esophagitis. Patients are typically treated initially with intravenous ganciclovir 5 mg/kg every 12 hours. Ganciclovir therapy is continued for 14 to 21 days.

Listing of usual initial therapeutic options, including guidelines for use, along with expected result of therapy.

A listing of a subset of second-line therapies, including guidelines for choosing and using these salvage therapies

Treatment of candida esophagitis. Patients who fail azole therapy can be treated with an echinocandin. The echinocandins are given intravenously, and are far more expensive than fluconazole. No data are available on the use of echinocandins in pregnancy.

Amphotericin B is the most toxic of the candida treatments, and must be administered intravenously. Amphotericin B is used for pregnant patients with esophageal candidiasis and for candida infections that are resistant to other antifungal agents.

Treatment of HSV esophagitis. Oral famciclovir and valacyclovir appear to have efficacy similar to acyclovir for treating HSV esophagitis. Famciclovir and valacyclovir are more expensive than acyclovir, but they are taken only three times per day (unlike acyclovir, which is taken 5 times per day), which may be an advantage for patients who have difficulty swallowing.

Unfortunately, HSV that is resistant to acyclovir is generally resistant to famciclovir and valacyclovir as well. Patients who do not respond to acyclovir can be treated with intravenous foscarnet, which has substantial toxicity (e.g., nephrotoxicity, electrolyte disturbances, genital ulceration).

Listing of these, including any guidelines for monitoring side effects.

How should I monitor the patient with disease X? 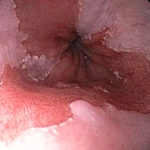