Are you sure your patient has diverticulitis? What should you expect to find?

How did the patient develop diverticulitis?

Which individuals are of greater risk of developing diverticulitis?

Beware: there are other diseases that can mimic diverticulitis:

What laboratory studies should you order and what should you expect to find?

Results consistent with the diagnosis

Results that confirm the diagnosis

What imaging studies will be helpful in making or excluding the diagnosis of diverticulitis?

What consult service or services would be helpful for making the diagnosis and assisting with treatment?

Any patient admitted with diverticulitis should have a surgical consultation.

If you decide the patient has diverticulitis, what therapies should you initiate immediately?

In 1978, Hinchey described four stages of diverticulitis, and this classification is still used today to help determine the extent of the infectious process and guide therapy:

This classification system was modified by Sher in 1997 and Wavery in 1999:

Dividing stage II into IIa and IIb: IIa being abscess amenable to percutaneous drainage and IIb being complex abscess with possible fistula.

Using clinical exam and imaging (CT scan) to stratify patients into these groups may be helpful when deciding on treatment.

In stage 0 and stage Ia, antibiotic treatment alone is usually adequate. In mild cases in patients tolerating an oral diet, this treatment may be given with oral antibiotics on an outpatient basis.

In stages Ib, IIa, and IIb, a combination of IV antibiotics +/- percutaneous drainage (for abscesses greater than 3cm) is usually attempted, with surgery reserved for those who fail to improve or develop peritonitis.

In stages III and IV, surgical resection is usually required to control the intra-abdominal spillage and inflammation (source control). Historically, this operation has been done in two stages with resection of the diseased colon and drainage of all infectious material, along with formation of a temporary ostomy, followed by a second stage in which re-anastomosis of the colon after the inflammation has resolved is performed (usually >6 weeks following the initial surgery).

More recent studies have shown similar outcomes after a single surgery during which the diseased colon is removed and the remaining colon is anastomosed together in one step, in well selected patients. These studies are almost all retrospective and may have a large amount of selection bias. One small randomized controlled trial compared a two stage approach with end colostomy followed by colostomy takedown to patients who underwent primary anastomosis with diverting loop ileostomy followed by ileostomy takedown. Although outcomes after the first surgery were similar, patients who underwent primary anastomosis and loop ileostomy were more likely to have their ostomy reversed and had fewer complications during the second surgery.

This is still an area of controversy and surgical decision making should be individualized to the patient and to the surgeon’s experience with these often complicated procedures.

In addition, there has been recent interest in laparoscopic lavage as a definitive treatment for Hinchey III diverticulitis. Evidence from recent randomized trials has been mixed, with one small trial favoring lavage with shorter hospitalization times and fewer reoperations and another showing a higher rate of reoperations in the lavage group. At this time there is not sufficient evidence to recommend laparoscopic lavage for as treatment for severe diverticulitis.

If I am not sure what pathogen is causing the infection what anti-infectives should I order?

What should you tell the family about the patient's prognosis?

How do you contract diverticulitis and how frequent is this disease?

What pathogens are responsible for this disease?

How do these pathogens cause diverticulitis?

What other clinical manifestations may help me to diagnose and manage diverticulitis?

How can diverticulitis be prevented?

Diverticulitis cannot be prevented, but all patients should be encouraged to eat food that is high in fiber to bulk up stools and decrease the amount of colonic pressure needed for transit.

WHAT'S THE EVIDENCE for specific management and treatment recommendations?

Feingold, D, Steele, S, Lee, S. “Practice parameters for the treatment of sigmoid diverticulitis”. Dis Colon Rectum. vol. 57. 2014. pp. 284-94. (These practice parameters were developed by the clinical practice guideline taskforce for the American Society of Colon and Rectal Surgeons and provide a good overview of the current surgical management of diverticulitis.)

The expected length of stay is quite variable, ranging from 2-5 days for uncomplicated diverticulitis to weeks or more for complicated cases that may require multiple procedures or surgeries. 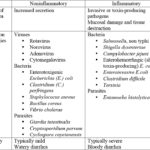