Are you sure your patient has a subarachnoid hemorrhage? What are the typical findings for this disease?

Subarachnoid hemorrhage (SAH) is bleeding within the subarachnoid space between the arachnoid membrane and the pia mater. Usually, the underlying etiology for this type of hemorrhage is a vascular lesion. In up to 20% of the cases, no vascular malformation is seen in imaging studies upon presentation, and the cause may remain unidentified. Vascular lesions are typically cerebral aneurysms.

The most common symptom of a subarachnoid hematoma (SAH) is a “thunderclap” headache, which is abrupt and is often described as “the worst headache of my life.” Other common signs of SAH include confusion, vomiting, seizures, and loss of consciousness. SAH also leads to rigidity in the neck and photophobia.

If the SAH continues untreated, a further symptom includes ipsilateral pupillary dilation, which is an indication of elevated intracranial pressure (ICP) and brain herniation. Neurologic symptoms associated with SAH include partial paralysis, loss of vision or double vision, seizures, and speech difficulties.

The key element in diagnostic evaluation of SAH is the non-contrast head CT scan. The blood clot is evident in over 90% of the cases if imaging is done in the first 24 hours. The sensitivity of the CT scan is low in minor bleeds, and a lumbar puncture is essential if the diagnosis is not confirmed on CT.

In pediatric patients, SAH is usually the result of head trauma, commonly the result of shaken baby syndrome. Prompt diagnostic evaluation and management is essential. About 10 percent of the patients die before admission, and only one third of patients will have a good outcome after adequate treatment.

SDHs are associated with a slower onset than epidural hematomas due to slower venous bleeding. Clinical signs of SDH may appear within minutes or may be delayed as long as 2 weeks. The head CT shows a hyper-dense crescentic lesion in an acute setting.

Classic symptoms of an EDH include initial decrease in consciousness caused by the actual trauma, followed by a symptom-free interval. CT imaging typically demonstrates a biconvex and hyper-dense lesion restricted by suture lines, often associated with a midline shift.

A head CT scan will show a clot in the subarachnoid space in the majority of SAH cases within 24 hours of the injury (Figure 2). Intracerebral extension may be seen in 20%-40% of patients, and intraventricular and subdural blood may be seen in 15%-25% and 2%-5% of patients, respectively.

The head CT should be performed using thin cuts through the base of the brain to increase the likelihood of detecting small amounts of blood. The distribution of blood (72 hours after the bleed) is unreliable in identifying the site of the aneurysm.

A head CT should be performed with 12 hours of the bleed for optimal sensitivity. CT sensitivity declines after 12 hours. Minor bleeds may also reduce the sensitivity of the study.

A brain MRI may also be conducted to detect the presence of a SAH. This may be especially useful in the diagnosis of SAH after 12 hours and even after a few days from the initial bleed.

After the diagnosis of a SAH is made, the etiology of the hemorrhage must be determined to determine optimal treatment. Digital subtraction angiography provides the highest resolution and sensitivity for intracranial aneurysms and can define specific anatomic features. CT and MR angiography are non-invasive imaging studies that can also be used to identify aneurysms 3 to 5 mm or larger for pre-surgical planning.

If angiography is still negative, patients should undergo a brain MRI to determine the presence of occult vascular lesions that may cause a non-aneurysmal SAH. These may include vascular malformations in the brain, spinal cord, tumors, and arterial dissection.

SAH should be suspected in any patient with abrupt and severe headache. Children with SAH must be evaluated for inflicted head trauma if the caregiver cannot give a plausible history for the injury mechanism. This is particularly important in the young children who cannot communicate their clinical history or symptoms.

An emergent head CT should be obtained; a lumbar puncture is required of suspicion is high and head CT is negative. Cerebral angiography should be performed and repeated if negative initially. In 25% of the cases, an aneurysm is found on the repeat angiography. Brain MRI has a high sensitivity for detecting subacute SAH. Supplementary laboratory studies include complete blood count, coagulation profile, and ECG.

An emergent head CT has an almost 100% sensitivity if performed in the first 12 hours. If the head CT is negative and a SAH is not excluded, a lumbar puncture can be helpful. Angiographic studies are performed to find the etiology of the SAH, and a brain MRI is helpful in the subacute setting. Supplementary laboratory studies include complete blood count and coagulation profile.

Prognostic factors for SAH include severity of hemorrhage, level of consciousness, patient age, and the amount of blood on the initial head CT. There are different grading systems to standardize the clinical classification or outcomes of patients with SAH. The Glasgow Coma Scale (GCS) evaluates the level of consciousness. The Hunt and Hess scale predicts the patient’s outcome based on the clinical condition using a scale from 1 to 5. The Fisher index describes the vasospasm risk based on the hemorrhage pattern on initial head CT. The Claassen index indicates the risk of delayed cerebral ischemia due to vasospasm after SAH. The Ogilvy and Carter classification includes age, Hunt and Hess grade, Fisher grade, and aneurysm size. Furthermore, there is a classification by the World Federation of Neurological Surgeons (WFNS).

If you are able to confirm that the patient has a subarachnoid hemorrhage, what treatment should be initiated?

The patient may be admitted to intensive care for constant monitoring of intracranial pressure (ICP), blood pressure, and vasospasms with transcranial Doppler (TCD) ultrasonography. Bedrest and analgesia are essential to lower the risk of rebleeding. Nimodipine has been shown to improve outcomes in SAH. Additional treatment includes seizure prophylaxis, antifibrinolytic therapy, and glucocorticoid therapy.

Vasospasms are present in up to 30% of patients with aneurysmal SAH. They may be prevented with the “triple-H” therapy, comprised of hyperdynamic therapy including hemodilution, hypertension, and hypervolemia.

For the aneurysm repair, either surgery (clipping) or endovascular techniques (coiling) may be performed.

Comprehensive follow-up is essential and includes plain skull film screening at two weeks, three months, and six months after aneurysm coiling; after surgical clipping magnetic resonance angiography (MRA) or CTA at three and six months is obtained. CTA is preferred for patients with clipped aneurysms, whereas MRA is preferred for patients with coiled aneurysms. Physical, occupational, and speech therapy should be initiated as soon as possible.

What are the possible outcomes of subarachnoid hemorrhage?

The functional outcome of SAH after treatment depends on multiple factors. The initial mechanism of injury and related complications are important prognostic indicators. In addition, the outcome is influenced by risks associated with the surgical or endovascular treatment itself.

The mortality rate in survivors of SAH is higher than the general population. The risk of death at five years is lower in those who receive endovascular treatment compared with those who undergo surgery. On the other hand, surgical intervention is associated with a lower incidence of late re-bleeding and recurrence in comparison to the endovascular approach.

Changes in memory, mood, and neurocognitive capacity are often encountered after SAH. However, the cognitive outcome does not appear to be influenced by the location of the SAH. Patients may also experience depression, anxiety, and sleep disturbances. In addition, approximately 5% of patients develop epilepsy af ter surgical intervention; the incidence is less after endovascular coiling.

Outcome in infants and children is similar to that for adults with SAH due to vascular causes; however, the risk of poor outcome is significantly higher for traumatic SAH.

The prevalence of intracranial saccular aneurysms is 5%, based on imaging and autopsy series. Up to 30% of patients have multiple aneurysms.

In infants and children, 8% of SAH is caused by accidental falls or events, compared to 30% for non-accidental traumas.

The leading cause (>85%) of SAH is aneurysms, in particular, saccular aneurysms. There are three different types of aneurysms: saccular, fusiform and mycotic aneurysms.

Perimesencephalic non-aneurysmal SAHs have an excellent prognosis. The bleeding is located around the mesencephalon and is not at risk for rebleeding. Patients have a normal life expectancy.

SAH is associated with a high mortality rate of 51%. About 10% of patients die before admission, and only one third of the patients will have a relatively good outcome after adequate treatment.

The complications include rebleeding, with the highest risk being in the first 24 hours after the SAH, and vasospasm, the leading cause of death and disability after aneurysm rupture. Vasospasm occurs after day 3, with a peak at day 7/8. Moreover, delayed cerebral ischemia, hydrocephalus, an increased ICP, seizures, hyponatremia, cardiac abnormalities, and hypothalamic dysfunction and pituitary insufficiency may complicate the recovery of the patient.

The outcome in children is simliar to that in the adult population, except that infants and children whose SAH is due to non-accidental traumatic SAH may have additional injuries which influence the outcome.

How can subarachnoid hemorrhage be prevented?

Prevention of traumatic SAH in infants focuses mainly on public awareness of shaken baby syndrome and non-accidental or inflicted head injuries in young infants and children.

Bederson, JB, Connolly, ES, Batjer, HH. “Guidelines for the management of aneurysmal subarachnoid hemorrhage: a statement for healthcare professionals from a special writing group of the Stroke Council, American Heart Association”. Stroke. vol. 40. 2009. pp. 994-1025. (Excellent review article for the management of SAH in adults and children.) 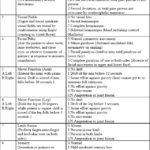