Are you sure your patient has a birthmark? What are the typical findings for this disease?

Common “birthmarks” are congenital skin lesions composed of structures normally present in the skin, but that aggregate focally in too great an amount or are absent. These include the following :

Other common congenital skin lesions result as a local embryologic defect in cutaneous development. These include the following:

A café au lait macule is characterized by a discrete, well-demarcated light brown (or “coffee with cream” colored) macule or patch (Figure 1). There is no overlying epidermal change. The color is homogeneous. They vary in size from several millimeters to greater than 3 cm. There is no associated induration of the underlying subcutaneous tissue.

Congenital melanocytic nevi present at birth as solitary, discrete dark brown papules or plaques (Figure 2 and Figure 3). The surface may be slightly raised, velvety, or verrucous, and dark long hair may be noted within the lesion.

A Mongolian spot is a blue to slate gray, ill-defined macule or patch, most commonly noted on the back, sacrum, or buttocks. Smaller lesions can occur on the extremities. They are particularly common in dark-skinned patients, and those of Asian ancestry (Figure 4). Nevus of Ito and nevus of Ota (Figure 5) are similar blue gray patches on the trunk and face, respectively.

Capillary malformations (so-called salmon patch, angel kiss, or stork bite) usually present on the glabella, upper eyelids, or posterior neck (Figure 8). They are characterized by flat, poorly demarcated pink to red patches and may become darker or more noticeable when the child cries or is hot.

Nevus sebaceus is a yellowish pink, well-demarcated, slightly raised oval plaque, most commonly seen on the scalp (Figure 9 and Figure 10). There is associated alopecia. Close inspection may reveal a slightly “bumpy” surface.

Cutis aplasia is a localized congenital absence of skin. It presents most commonly on the scalp (Figure 11) but can occur anywhere on the body. It is characterized clinically by a midline scalp scar or defect present at birth. There may be an associated ulcer or erosion or a translucent film or membrane at the affected site. The defect can vary in thickness, and may involve epidermis, dermis, subcutaneous tissue, and underlying bone. The area heals with fibrosis and alopecia (Figure 12).

Dermoid cysts present as firm, round to oval, skin-colored dermal nodules (Figure 13). The overlying skin is normal and mobile. A small sinus, punctum, or protrusion of hair may be seen in the center. They are most common on the lateral brow or orbital rim but can present anywhere on the face, scalp, neck, or midline trunk. They may be noted at birth, or later in infancy or childhood when they become traumatized or infected.

An accessory tragus can occur at any site along the first branchial arch’s embryologic migration pathway (in a line drawn from the ear tragus to the oral commisure). It presents on the preauricular face as an exophytic flesh-colored papule (Figure 14). It may be soft and compressible or firm, depending on the amount of cartilage present within the lesion. Multiple lesions are common.

A thyroglossal duct cyst presents as a small flesh-colored to red papule on the midline of the neck or as swelling of the anterior neck (Figure 15). When located over the hyoid, it is displaced superiorly with swallowing or tongue protrusion.

The differential diagnoses includes the following:

Congenital melanocytic nevi result from a proliferation of cytologically bland nevomelanocytes within the epidermis and dermis, with associated pigment deposition.

Mongolian spots (or dermal melanocytoses) likely occur from lack of complete migration of melanocytes from the neural crest to the skin. The melanocytes become suspended in the dermal tissue, and the bluish color noted clinically results from a phenomenon known as the Tyndall effect. When particles (melanocytes) are scattered in a suspension (the dermis), blue light is scattered more strongly than red, and the skin of the affected area appears faintly blue or gray.

Ash leaf macules and nevus depigmentosa result from a local decrease in melanin within the basal epidermis. Melanocyte number may be normal or decreased. Multiple ash leaf macules are associated with tuberous sclerosis.

Capillary malformations of the face and neck occur when an increased density of small capillaries are present within the dermis.

Cutis aplasia is localized congenital absence of skin without preceding trauma. The cause is unknown.

Dermoid cysts result from failure of fusion of embrylogic skin planes. The cyst is thus composed of normal epithelial structures, including squamous epithelium, hair follicles, sebaceous glands, and other adnexal structures, encapsulated or sealed off as a pouch from the surrounding tissue. These cysts are sometimes termed whole skin cysts, reflecting their numerous components.

Laboratory studies are not indicated in the evaluation of most birthmarks. Histologic examination is not necessary. If biopsy is performed, the involved cutaneous structures can be demonstrated on routine hematoxylin and eosin staining.

Imaging studies are not necessary in most cases.

In cases of multiple café au lait macules and suspected neurofibromatosis, imaging of the sphenoid wing may show dysplasia.

In cases of multiple ash leaf macules and suspected tuberous sclerosis, a multidisciplinary approach to evaluation is indicated. This may involve imaging of the brain, lung, heart, and kidneys to investigate for other characteristic signs of the syndrome.

Ultrasonography of the scalp in cases of cutis aplasia can indentify any underlying bony defects.

Midline dermoid cysts should be evaluated with magnetic resonance imaging before surgical excision to exclude the possibility of encephalocele, nasal glioma, ectopic neural tissue, or an underlying intracranial connection.

Evaluation of thyroglossal duct cyst with ultrasonography or nuclear scan is recommended before surgical excision. This will exclude the possibility of ectopic thyroid tissue, bronchogenic cyst, or lymphadenopathy.

If you are able to confirm that the patient has a birthmark, what treatment should be initiated?

Treatment of most birthmarks is generally not necessary or indicated.

Café au lait macules, Mongolian spots, and ash leaf macules may become less noticeable with time, as the skin naturally darkens with age. Mongolian spots are the most likely to fade, with rare lesions persisting after age 5 years. Laser treatments are generally ineffective. Excision is theoretically possible, but the resulting scar makes this a poor option, and parents should be discouraged from surgical removal of these lesions.

Capillary malformations tend to fade by age 2 years, with those on the posterior neck being the most likely to persist into adulthood. For lesions that are diffuse, very dark, or cosmetically bothersome to patients, treatment with the pulsed dye laser (585-595 nm) can be effective. This usually requires multiple treatments over several weeks to months.

Cutis aplasia does not require treatment. If the resulting defect, scar, or alopecia is cosmetically bothersome to patients, the affected area can be excised, and the normal skin approximated.

The management of nevus sebaceus is controversial. Treatment in infancy and childhood is generally not recommended. During puberty, hormonal stimulation of the involved sebaceous glands can result in thickening and “warty” like papillomatosis of the lesion. Patients may complain of frequent irritation from shampooing and hair care and may be bothered by the appearance. In addition, there is an increased risk of development of secondary neoplasms within a nevus sebaceus after puberty (most commonly benign lesions including trichoblastoma and syringocystadenoma papilliferum, although basal cell carcinomas and squamous cell carcinomas have been reported). For these reasons, many authors recommend prophylactic surgical excision of nevus sebaceus at puberty.

The indication for removal of accessory tragi is cosmesis. They can be treated with simple excision with local anesthesia in the outpatient setting .

Dermoid cysts and thyroglossal duct cysts that are frequently traumatized, infected, or otherwise symptomatic can be treated with surgical excision.

Pulsed dye laser used for treatment of capillary malformations is painful, and results in postprocedure bruising.

Surgical excision of any birthmark carries the risk of outpatient skin surgery, including pain, bleeding, infection, scar, unwanted cosmetic outcome, and recurrence of the lesion.

Clear confirmation of the correct diagnosis of thyroglossal duct cyst is imperative before surgical excision, as accidental removal of ectopic thyroid tissue can result in iatrogenic hypothyroidism.

What are the possible outcomes of birthmarks?

Small congenital melanocytic nevi occur in 1% of newborns. There is no sex predominance and no known genetic or familial influence.

Mongolian spots are very common in dark-skinned newborns and are seen in 90% of Asian, 80% of black, 45% of Hispanic, and 10% of white neonates. Nevus of Ito and nevus of Ota are also more common in Asian newborns, and show a significant female predominance (3:1 female to male ratio).

Capillary malformations are very common, occurring in 40% of infants. They are more common in white neonates and do not show a sex preference.

Cutis aplasia occurs in 1/10,000 live births. It is most commonly an isolated defect but can occur in association with other syndromes such as Opitz syndrome, Adams-Oliver syndrome, and epidermolysis bullosa.

Dermoid cysts are common in neonates, but less than half are noted at birth, with the majority recognized by age 5 years.

Accessory tragi and thyroglossal duct cysts, like many developmental cysts and sinuses of the branchial clefts, are relatively common. Parents may give a history of similar lesions in relatives, although single-gene defects have not been identified.

There is no unifying genetic defect responsible for the development of birthmarks. Patients who present with birthmarks as a cutaneous manifestation of an underlying genetic syndrome will have associated gene defects.

Birthmarks unassociated with syndromes generally do not present with complications other than unwanted cosmetic appearance.

How can birthmarks be prevented?

There is no known therapy or intervention available for preventing common birthmarks.

Powered By Decision Support in Medicine.
Jump to Section
Next post in Pediatrics 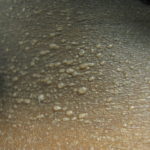